I owe my foremost thanks to all those in Yemen who cannot be mentioned by name. Many have helped with information, opinions, practicalities and enthusiasm. The generosity of the Yemenis has been amazing. I would like to thank the two supervisors of my PhD thesis on which this book is based, Professor Knut S. Vikør and Professor Anne K. Bang at the Department of Archaeology, History, Cultural Studies and Religion (AHKR), University of Bergen, Norway. For financial support, I thank the Faculty of Humanities, University of Bergen for providing me with a three-year PhD scholarship and support for the production of this book and the Meltzer foundation for providing additional support for the fieldwork.

At the University of Bergen I owe many thanks to colleagues who have provided a social and intellectual environment during the years of the PhD project, many of who have also commented upon early parts of the draft: John-Erik Sætren, Katja J. Fredriksen, Kjersti G. Berg, Liv Tønnesen, Marianne Bøe, Hilde G. Kjøstvedt, Frode Løvlie, Renate Lunde, Kjetil Fosshagen, Richard J. Natvig, Pernille Myrvold, Ludmila Torlakova.

For commenting upon the draft of the PhD thesis, or parts of it, and encouragement I also wish to thank Andre Gingrich, Daniel Varisco, Laila al-Zwaini, Anna Würth and David Powers. For reworking the draft into a book I received invaluable comments from the two external examiners or the thesis, Brinkley Messick and Randi Deguilhem. During my post doc in Vienna I received useful comments and support from my colleagues at the Institute for Social Anthropology (ISA), Austrian Academy of Sciences (AAS), Andre Gingrich, Magdalena Moorthy-Kloss, Odile Kommer, Daniel Mahoney, Marieke Brandt and especially Johann Heiss, and Paolo Sartori at the Institute of Iranian Studies. I also want to thank the anonymous reviewers and the staff at Brill, and Valerie Joy Turner who copy edited the manuscript and AHKR who provided funds for that.

In Yemen my foremost gratitude is to the learned Mohamed Abdulsalam Mansour who taught me waqf law. His enthusiasm for knowledge will always inspire. I am grateful for the research permit provided by the Yemeni Centre for Studies and Research (YCSR) and its director ʿAbd al-Aziz al-Maqāliḥ, and its staff, among them, Khaled al-Surayhi. The French Research Centre in Sanaa (Centre Français d’Archéologie et de Sciences Sociales—CEFAS) and its staff and researchers and the Yemen College for Middle Eastern Studies (YCMES) were most helpful for providing practical help and support. In the Ministry of Awqāf, I wish to thank the former minister, al-Qadi Hamoud al-Hittar, and especially the Director of investments, ʿAlī Muḥammad al-Farrān, for sharing with me a copy of the manuscript of his book on waqf in Yemen. Several local public waqf administrators in Sanaa and elsewhere provided me with information and showed me helpfully around in their areas. I am grateful to the Imam Zayd bin Ali Cultural Foundation (IZBACF) and their staff for providing me with access to their archives and their digital material in a most professional way. I promised them to translate the fiqh texts correctly and I hope that I managed to do that as far as possible. I also appreciate the Ministry of Culture and its former Deputy Minister Sam Yahya al-Ahmar for providing access to the Dār al-Makhṭūṭāt, and The National Centre for Archives in Sanaa and its director al-Qadi Ali Abu l-Rijal and staff. The former director for the project “Conservation of the Historic Cities” Omar al-Hallaj in the GTZ invited me to Hadramawt, where I also was supported by Sālim and ʿAlawī BinSumayt in Shibam. In the Ministry of Justice, I wish to thank the supreme court judge Zayd Jaḥḥāf and several other employees, especially Muḥammad al-ʿUmaysī whose hospitality and knowledge of Yemeni bureaucracy was indispensable. I am very grateful for being given the chance to take part in the annual yearly Canadian Archaeological Mission to Zabid in 2010, directed by Ingrid Hehmeyer, together with employees from The General Authority of Antiquities and Museums (GOAM), among them, Aḥmad al-Masʿabī. In Rayma, the local Director of Antiquities, Mahdī al-Quṭwī, and several others contributed in many ways. I am also grateful to Gerhard Lichtenthäler and Frédéric Pelat who provided advice and support during the fieldwork. While acknowledging the aid and contributions, all shortcomings are mine.

Finally, I wish thank my parents for all the encouragement and support, Astrid Langehaug Hovden and Øystein Hovden. 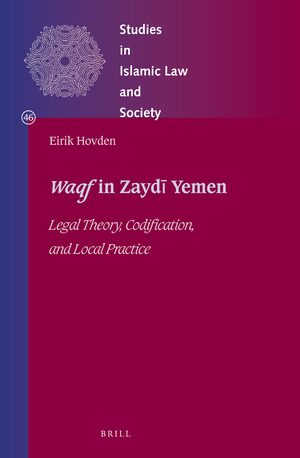