The Good, the Bad, and the Ugly?

The relationship between international investment treaties and the underlying contracts remains a highly disputed matter in international investment law. This project explores the contract-treaty interaction by using the renegotiation of regulatory contracts in the sector of energy infrastructure as a natural experiment, with a particular emphasis on the arbitral disputes that arose from the Argentine crisis. It deploys to this end an original analytical framework drawing from transaction cost economics and relational contract theory. The result of the novel combination of these two analytical frameworks is the construction of an interpretative methodology that takes an integrated approach to the two instruments – the contract and the overarching treaty – in a way that achieves a more sustainable balance between the competing public and private interests.

The book rests in particular on three arguments: the first is the relational-contract nature of dynamic treaty standards, which require the long-term cooperation of the parties. The second is the status of these vague standards as default rules complemented by the provisions of the underlying contracts, which are also relational, and act as gap-fillers. The last, normative argument is that the relationship between these (default) treaty rules and the (gap-filling) contractual provisions should be determined by transaction cost economics, and specifically the goal of economizing on the transaction costs of bounded rationality and opportunism when and interpreting relational treaty standards.

The relational contract theory interpretation of investment-treaty standards, namely the standard of fair and equitable treatment, has evident policy implications for the reform of the investor-state dispute settlement system and the future of international investment relations. Applying the principles and tools of relational contract theory to the interpretation of these standards would bring more consistency and pragmatism to the adjudication of disputes arising from the renegotiation of regulatory contracts. More importantly, it would be a powerful law-and-economics tool to achieve the alignment of the parties’ incentives both during the dispute and, in a backward induction, the implementation of their contract. Forcing the parties’ cooperation and contributing to the success of their concession and thus the ensuing development of a host state are long-neglected priorities of international investment law, which shall form part, though, of the mission of international investment arbitration as global governance. 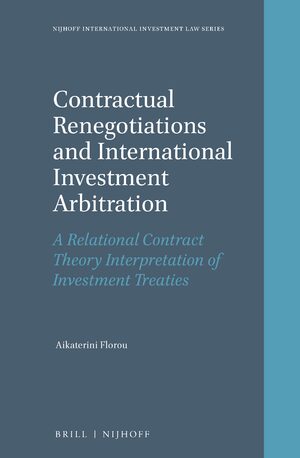