holds a PhD in History and Middle Eastern Studies from Harvard University, and is currently Chair of Early Modern Mediterranean History at the European University Institute in Florence, Italy. His published works include The Ottoman Age of Exploration (Oxford, 2011), and his research interests include the history of cartography, the comparative history of empires, and of explorations. Since 2010, he has served as the executive editor of the Journal of Early Modern History.

is Head of the Southeast Asia section at the British Library, London. Her main research interests are in Malay and Indonesian manuscripts, letters and seals; Islamic chancery practice; and the art of the Qurʾan in Southeast Asia. With Andrew Peacock she co-directed the British Academy research project Islam, Trade and Politics across the Indian Ocean (2009–2012), and co-edited the volume From Anatolia to Aceh: Ottomans, Turks and Southeast Asia (Oxford, 2015). Her catalogue of Malay Seals from the Islamic World of Southeast Asia will be published by NUS Press, Singapore, in 2019.

is a Professor at the Department of Information and Records Management at Istanbul University. He finished his BA and MA at Marmara University, İstanbul and obtained his PhD in 2005 from the same university. His PhD thesis focused on the Organisation of Ottoman finance department and its records in the 16th century. This work was published in 2010 with the title Osmanlı İmparatorluğunda Defterdarlık Teşkilatı ve Bürokrasisi (The Organization and Bureaucracy of the 16th Century Ottoman Finance department). His main field of study is Ottoman Empire’s record systems, with an emphasis on history of archives, organization of Ottoman institutions and Ottoman diplomatics.

studied Southeast Asian history at the School of Oriental and African Studies and at the University of Michigan. She lived in Burma for three years in Burma while learning the language and undertaking research on Burmese nationalism. In 1975 she joined the British Library where she became Curator of the Southeast Asia collections, and since retiring has worked as an independent scholar. She has published a book on the Life of the Buddha, and an annotated Burma Bibliography, and co-edited a Bibliography of Southeast Asian Languages and Literature, and is the author of many articles on Burmese manuscript art and other subjects.

is an Associate Professor of History at Istanbul Medeniyet University. He finished his BA and MA at Marmara University, Istanbul and obtained his PhD in 2008 from Leiden University. His PhD thesis investigated the trade between the Ottoman Empire and the Dutch Republic in the eighteenth century with a focus on the role of Ottoman merchants. This work was published by Brill in 2012 with the title Ottoman and Dutch Merchants in the Eighteenth Century: Competition and Cooperation in Ankara, Izmir, and Amsterdam. Since 2009, he has been engaged in The British Academy financed research project Islam, Trade and Politics across The Indian Ocean, investigating Ottoman archival sources on the interactions between the Ottoman Empire and Southeast Asia. This project has already resulted in the book (authored with A.C.S. Peacock) The Ottoman Empire and The Kingdom of Siam Through the Ages (Bangkok: Institute of Asian Studies, 2017).

is Professor Emeritus at Sophia University. She obtained a Bachelor’s degree in social anthropology from Tokyo Metropolitan University and a Master’s degree in international relations from Tokyo University, and taught at the Faculty of Global Studies of Sophia University. She specializes in Philippine politics and modern history, with a special focus on Muslims in the Philippines, and continues research on political, social, and religious movements and thoughts of Muslims in the Philippines. She has written extensively on these subjects. Her publications include “The Journeys of Two Mindanao Ulama in the Late Eighteenth to Early Nineteenth Century” (Journal of Philippine Local History & Heritage, vol. 3, no. 1, 2017) and Bangsa and Umma: Development of People-grouping Concepts in Islamized Southeast Asia (coedited with H. Yamamoto, A. Milner, & K. Arai. Kyoto University Press, 2011).

is a professor of Humanities and Muslim Art History at the Department of Art Studies at the College of Arts and Letters of the University of the Philippines (UP). He finished his BA at Mindanao State University – Marawi and MA at UP, and obtained his PhD in 1999 in Philippine Studies from UP. He has written extensively on the arts, culture, and history of the Muslims in the Philippines and the Mindanao problem. His major work is Space and Identity: Expressions in the Culture, Arts and Society of the Muslims in the Philippines (Quezon City: UP-Asian Center, 2003). He is also an artist, and paints Muslim subjects and illustrates Muslim designs. He currently serves as a Commissioner of the National Historical Commission of the Philippines.

is Senior Lecturer in the Department of History, Politics and Social Sciences at the University of Greenwich, London, and specialises in Ottoman relations with the wider world. His publications include British-Ottoman Relations, 1661–1807: Commerce and Diplomatic Practice in Eighteenth-Century Istanbul (Woodbridge: Boydell & Brewer, 2017). 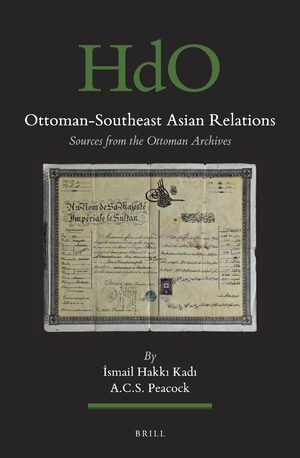