In: The Rhythm of Modernization: How Values Change over Time
Author: Raül Tormos
Free access

This book started as a doctoral dissertation defended in June 2013 in the Department of Political Science at the Autonomous University of Barcelona. It benefited from the supervision of Eva Anduiza, a fantastic academic and advisor now at Stanford University, and the wise comments of committee members and external evaluators. The doctoral committee was composed by the illustrious scholars José Ramón Montero (uam), Willem Saris (upf-recsm), and Martin Kroh (Universität Bielefeld); who unanimously awarded the highest qualification. To obtain the European Doctor distinction, the manuscript was previously reviewed by two academics from foreign European universities: Tilo Beckers (Heinrich-Heine Universität) and Eva Jaspers (Universiteit Utrecht). The current version of the text takes into account all their comments, as well as those offered by the two anonymous reviewers designated by Brill Academic Publishers and the series editor, Alberto Martinelli. To all of them, I am deeply in debt. The work has been further updated in different ways. It includes recent releases of survey data, theoretical and methodological advances in the field, as well as additional commentaries and new statistical analyses. I would like to thank the editorial team at Brill for their help and kindness throughout the publication process.

The contributions over time of many other people have made this work possible. I would like to extend my appreciation to all of them. Special thanks to Hermann Schmitt (mzes), who first guided me and introduced me to the field of comparative research, and to the tmr colleagues (down im Keller) of that wonderful year in Mannheim: Johan Martinsson, Laura Castiglioni, and Alice Ludvig. I am in debt to my old mentor Agustí Bosch for his many advices and support, as well as to my friends at the Autonomous University of Barcelona, Marta Cantijoch, Guillem Rico, and Carol Galais. Both Tània Verge and Jordi Muñoz deserve a special consideration, since their suggestions and encouragement along the toughest moments of this long journey have been decisive. I am in debt to Mariano Torcal for his useful observations at different stages of the process. Meeting Willem Saris has been crucial for me in many respects. His rigorous scientific thinking is an example to follow. I would like to thank Michael Lewis-Beck for his wise comments on early versions of this work. I also owe much to the thoughtful insights of Sergi Pardos-Prado, Dani Marinova, Michael J. Jensen, Roger Soler, Katarzyna Wilk, Lukas Linek, Miguel Caínzos, and Antonio M. Jaime-Castillo. I am grateful to Kazimierz Slomczynski, Joshua Dubrow, Christof Wolf and Tilo Beckers for providing a nice environment to discuss my work. The help and generosity of Philip Schwadel from the University of Nebraska-Lincoln was decisive at certain stages of the analysis. I also want to express my gratitude to Robert Andersen, Sarah-Jayne Blakemore, Mark Chaves, Eva Hamberg, Virginia Sapiro, and Karel Dobbelaere for providing extra-information that has been priceless.

While working on similar topics, I was fortunate to meet marvelous colleagues and friends along the way, Henrik Dobewall (Tampereen Yliopisto), Malcolm Fairbrother (Umeå Universitet), and Maksim Rudnev (hse). Our conversations and debates are always fruitful and they have contributed to enrich this book. I am also thankful to the endearing community of social scientists summoned by Tilo Beckers and Pascal Siegers, including Edurne Bartolomé-Peral, Hermann Dülmer, Gert Pickel, Annette Schnabel, Constantin Klein, Malina Voicu, Peter Schmidt, Sonia Roccas, and many others with whom I have been able to discuss my work. It was Elena Prutskova, from this nice bunch, who insisted me on getting this book published. I owe much to Gabriel Colomé and Jordi Argelaguet, former and current directors of the Centre d’Estudis d’Opinió, for their encouragement and support over the years.

My wife, Gabriela Alexe, has always been my pillar and guiding light. Without her, this would have never been possible. I dedicate this book to her, and to our two little treasures, Robert and Sofia.

The Rhythm of Modernization: How Values Change over Time 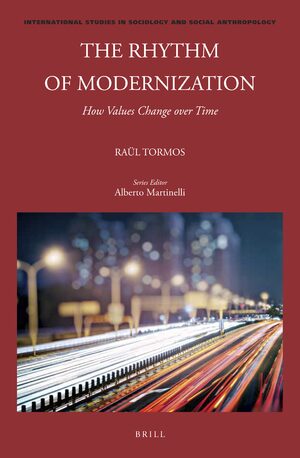