The symposium enabled an unusual conversation to emerge across these fields. Instead of the common economic discourse that focuses on skills deficits, implicitly putting pressure on education to solve economic problems, researchers made genuine attempts to get inside the ideas, concepts, and difficulties of each other’s fields of expertise. The economists and sociologists foregrounded the limitations of the economy and the ways in which it structures access to jobs. This was discussed in relation to a set of presentations covering the process by which expertise in specific fields is reconfigured into professional and occupational education. Researchers from different disciplines were able to explain the constraints of their own field, showing the limitation of the extent to which education can be immediately responsive to employers’ needs without reducing the specialisation of the profession.

In these acknowledgements we would particularly like to mention Johan Muller, who assisted with reflections, analysis and the closing of the symposium in a thoughtful manner which developed our thoughts of the future. We would also like to thank Jeanne Gamble, who assisted in conceptualising the symposium and was a constant source of intellectual support during and after it. Two PhD students, Palesa Molebatsi and Naomi Alphonsus, provided invaluable support in the organisation of the symposium, in addition to presenting at it. Kholofelo Malumane and Caroline Mavhutha from the REAL Centre were also instrumental in its success.

The symposium was funded through the Education Policy Consortium, which is supported by the South African Department of Higher Education and Training, and some of the research time spent in the production of this book was also funded through this consortium. We are very grateful to the Department, and to its leader, Minister Blade Nzimande, for the support that it has given to the consortium, which has enabled institutional capacity building in a growing research field at a time of general resource constraints.

We are very grateful to the peer reviewers who provided useful and insightful commentary, which helped to sharpen arguments and strengthen the book as a whole. For reading the full manuscript and giving us critical comments, and for constant intellectual support, we would particularly like to thank Michael Young.

We thank Monica Seeber for her meticulous and thoughtful editing work, which has also considerably strengthened the book.

Chapter 2 by Jeanne Gamble was originally published as Gamble, J. (2016). From labour market to labour process: Finding a basis for curriculum in TVET. International Journal of Training Research, 14(3), 215-229. It has been included here with the kind permission of Taylor & Francis.

Knowledge, Curriculum, and Preparation for Work 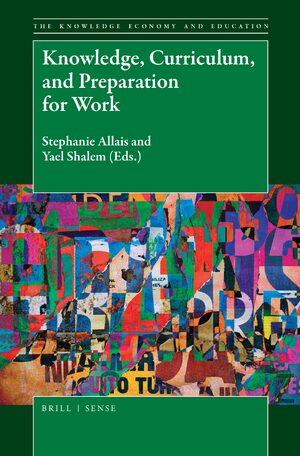