This chapter arises out of the creation of performances of Marguerite Duras’s Eden Cinema (L’Éden Cinéma), a play very rarely performed in English, and Savannah Bay, a text that is perhaps a little more familiar to English speaking audiences. Lib Taylor directed both as part of a research project at the University of Reading on performing Duras (Eden Cinema, 2005 and Savannah Bay, 2007). In Duras’s theatre texts, space functions simultaneously as both abstract and concrete. Its meanings are continuously renegotiated as at any point it conflates several physical locations and temporal frames while also embodying the insubstantial, and provisional figures who inhabit the space no more than partially. Stage space fluidly expands and shrinks to encompass room, house, veranda, gardens, fields, and roads and cities beyond as well as seemingly having an agency of its own in summoning up characters, stories, memories and sentiment. This chapter considers the questions raised by the later plays when their theatrical realization destabilises readings by means of material performance in physical space. 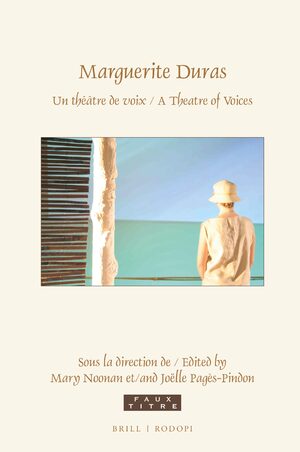