“When the Christ Appears, Will He Do More Signs Than This Man Has Done?” (John 7:31): Signs and the Messiah in the Gospel of John

The Gospel of John is not unique in representing Jesus as performing miracles, but the way that John uses signs to point to Jesus’s Christological identity stands out among the canonical gospels. In John, when Jesus is called χριστός—Christ, messiah—it is often in the context of a sign being performed. However, the relationship between Jesus’s signs in John and his depiction as messiah is curious, since most early Jewish texts that describe messiahs focus on other characteristics: their ability to defeat enemies, their royal lineage, or their priestly characteristics, for example. Nonetheless, there are brief references to other examples of ancient Jews considered to be messiahs who are likewise associated with miraculous events, for example, Theudas and “the Egyptian.” Given that signs are also used to point to false prophets and evil beings in other texts that depict Jesus as Christ, this paper explores the connection between the signs in John and the Gospel’s messianic Christology.

Reading the Gospel of John’s Christology as Jewish Messianism 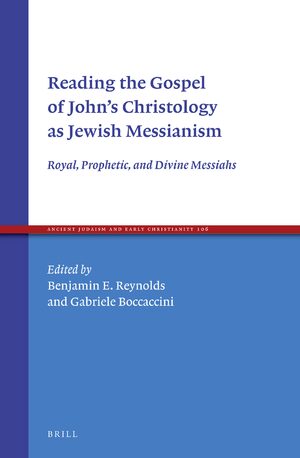