This volume is based on a conference held at Arizona State University on September 18–19, 2016, to mark the (near) completion of the Library of Contemporary Jewish Philosophers (hereinafter, the Library or LCJP), which Aaron W. Hughes and I have edited for the past five years (2013–2018). The idea for the celebratory conference emerged after several participants in the Library felt that the project deserved a public event to reflect on its contribution to Jewish culture and more broadly on the status of Jewish philosophy today. To bring this conference about, Professor Hughes and I combined the resources of our two academic institutions—the University of Rochester and Arizona State University—and convened the conference, which was held at Arizona State University. In addition to the Center for Jewish Studies at the University of Rochester and the Center for Jewish Studies at ASU, the conference was funded by the College of Liberal Arts and Sciences at ASU, and by the Irving and Miriam Lowe Chair of Modern Judaism at ASU. The generous gift of the Lowe family has facilitated many research activities of the Center for Jewish Studies at ASU for which we are most grateful.

The Library, the conference, and this volume have come to pass because of the contribution of many people. I want to acknowledge and thank those who were instrumental to these projects. First and foremost, my co-editor, Aaron W. Hughes, with whom I have also edited the volume Jewish Philosophy for the Twenty-First Century: Personal Reflections.1 The twenty volumes of the Library should be read together with that volume, because the two projects were conceptualized together and because several people who are featured in the Library have also contributed to the edited volume. In tandem these projects showcase the richness of contemporary Jewish philosophical activities, and I very much hope that they will energize Jewish philosophy.

The Library, including this concluding volume, and Jewish Philosophy for the Twenty-First Century, have all been published by Brill. Many thanks are due to our editor at Brill, Jennifer Pavelko, for supporting all three projects, and for committing resources to the promotion of Jewish philosophy worldwide. Thanks also to assistant editor Meghan Connolly for all her work on the volumes. In the turbulent world of scholarly publishing today, Brill’s commitment to Jewish studies in general and to Jewish philosophy in particular is commendable and worthy of note. It has been a pleasure to work with them and the production team at Brill.

One person in particular was crucial to the successful production of the Library and this project—our copy editor, Mike Isralewitz. Although we have never met in person, it has been a pleasure to work with Mike over the past five years and to benefit from his meticulous editorial work and utter professionalism. I got to know Mike when I guest edited a special issue on Judaism and science for the CCAR Journal: Reform Jewish Quarterly (2012). Favorably impressed by his editorial skills, I prevailed on Brill to hire him as copy editor of the Library and of this volume. Mike has made it possible for us to generate twenty volumes in five years, and we are grateful for his superb work ethics and excellent editorial skills.

Producing the Library required considerable logistical arrangements, because each volume involved an interview with the featured philosopher. The staff of the Center for Jewish Studies at ASU, Ilene Singer and Dawn Beeson, have helped with many administrative aspects of this logistical project, and we are very grateful to them. The recorded interviews in the Library were transcribed by Anne Diamos, of WebTranscripts, who turned the recorded interviews into written texts that could be edited. Without her dedicated work the volumes could not have come to pass. Because of the interviews, the project was more costly to produce than an ordinary edited anthology of essays. The Library, the conference, and this volume have benefited from the generosity of the Salo W. and Jeannette M. Baron Foundation. We are most grateful to the trustees of the Baron Foundation for their support and contribution to Jewish learning and for their involvement in the activities of the Center for Jewish Studies at ASU.

Finally and most importantly, I want to thank all the thinkers who are featured in the Library for their willingness to share their time, energy, and creativity with us. It was fascinating and rewarding to get to know them more personally and to learn from them. Each volume in the Library begins with an introductory essay that offers an intellectual portrait of each thinker. Aaron Hughes and I wrote the introductions to a total of six volumes and the introductions to the remaining fourteen volumes were written by Leonard Levin, Michael L. Morgan, Jonathan K. Crane, Jonathan Garb, Alan Mittleman, James A. Diamond, Steven Resnicoff, Sam Berrin Shonkoff, Jules Simon, Ariel Evan Mayse, Ronit Irshai, Noah J. Efron, Alex Sztuden, and Paul Franks, listed in the order of the volumes. Their excellent essays have not only given depth to the project, but also contributed to its argument: Jewish philosophy is alive and well, if only we pay attention to it and frame it properly. This final volume of the Library seeks to do that by featuring three generations of practitioners of Jewish philosophy.

The Future of Jewish Philosophy 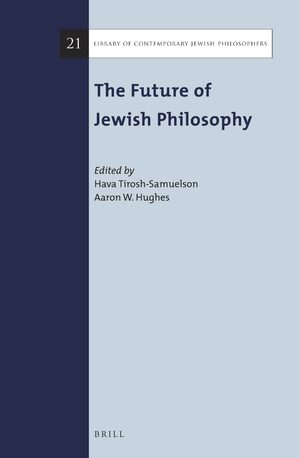