4. Designing for Increased Participation by Using Game-Informed Learning and Role-Play

Pupils as Co-Researchers in a Study on Democracy

In: Games and Education: Designs in and for Learning
Author: Johanna öberg

A learning activity inspired by game-informed learning was designed with the aim of promoting participation and critical thinking. The observed learning activity was analysed in order to understand how pupils act within the given and created roles, frames, and positions. The learning activity was based on role-play, in which the pupils assumed the role of co-researchers. The implemented role-playing activity included gamification elements (e.g. rewards, narrative, and feedback). We explored the question: How does game-informed learning promote participation? A total of 15 pupils participated in the activity over the course of 16 weeks. When role-playing as co-researchers, the pupils choose their own research question and research methods. The process of this research game was documented in 16 field notes, two interviews with the participating teachers, and several observations. This data was analysed according to Goffman’s and Mead’s concepts of role. The findings indicate that several factors affect pupils’ engagement in the role of co-researchers: being perceived as professionals, interacting and communicating in a new location and setting, giving and receiving feedback, and being recognised through the results obtained. The study contributes to the understanding that a design focused on such factors can facilitate children’s participation.

Games and Education: Designs in and for Learning 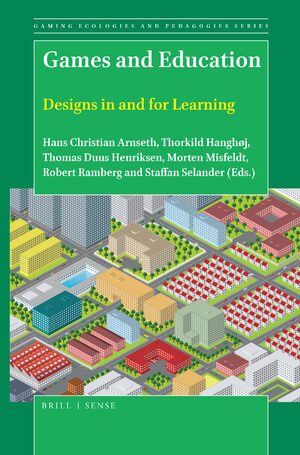