Siam Bhayro (Ph.D. 2000, University College London) is Associate Professor in Early Jewish Studies at the University of Exeter. His research interests include the Bible, Semitic languages, medicine in the Christian and Islamic orient, and Jewish magic.

Alan C. Bowen is a historian of ancient Greco-Latin science and philosophy. He has written extensively on astronomy and its numerous contexts, with special attention to the development of this science during the Hellenistic period. He is currently writing a monograph on book 1 of Ptolemy’s Almagest.

Institute for Research in Classical Philosophy of Science

Lis Brack-Bernsen researches the history of mathematics and astronomy, especially, the development of Babylonian astronomy and the use of computer simulations of ancient Babylonian observational data in systematic analyses. Her aim is to reconstruct the ancient rules governing prediction and to discover the concepts and methods behind early Babylonian astronomy.

Giuseppe Cambiano is interested in the history of ancient philosophy, above all Plato and Aristotle, as well as in its relationships with Greek geometry, mechanics, and medicine, and with ancient social and political contexts; the reception of both ancient philosophy and ancient political models in modern and contemporary philosophy.

Nicola Denzey Lewis works on Gnosticism and the social and intellectual history of the Roman Empire from the second to the fifth centuries CE, primarily in the city of Rome.

James Evans works on ancient Greek astronomy as well as on the history of physics and astronomy from the 18th to the 20th century. He is editor of the Journal for the History of Astronomy.

Klaus Geus is an ancient historian, philologist, and geographer. In 2009, he was appointed professor of the historical geography of the ancient Mediterranean at the Free University Berlin. He works in the areas of ancient geography and astronomy.

Gerd Graßhoff researches the history and philosophy of science from the Babylonians to current science, focusing on ancient astronomy and its medieval reception. His methodological investigations concern the evolution of scientific thinking including its processes of innovation and their development. Graßhoff introduced artificial intelligence approaches of computer systems in the study of the history of science.

Dorian Gieseler Greenbaum is interested in the history of astrology, including its theories, philosophies, and practice; the concept of the daimon in antiquity; astronomy, astrology, and medicine; divination and cosmology; and concepts of fate in antiquity. Her book, The Daimon in Hellenistic Astrology: Origins and Influence, was published by Brill in 2016.

Robert Hannah has written on Greek and Roman calendars, time-telling devices, and the use of astronomy in architecture. His publications include the books Greek and Roman Calendars: Constructions of Time in the Classical World (London, 2005) and Time in Antiquity (London, 2009).

Stephan Heilen researches the history of the natural sciences and mathematics in GrecoRoman antiquity and the Renaissance, especially astrology, astronomy, and geography; Neo-Latin literature, especially didactic poetry; forgeries of texts and artifacts; and the history of Classical Scholarship in the 19th and 20th centuries.

Richard L. Kremer studies ancient and medieval Latin astronomy, focusing especially on computational practices, astronomical tables, and instruments in both paper and brass. Part of an international team studying Alfonsine astronomy in the 14th and 15th centuries, he currently is investigating individual Latin manuscripts, looking for clues as to how earlier users performed computational and astrological tasks with their books.

Clemency Montelle is Professor in the School of Mathematics and Statistics at the University of Canterbury, Christchurch, New Zealand. She has research interests in the mathematical history of several early cultures of inquiry including Mesopotamia, Greece, India, and the Islamic Middle East.

Mathieu Ossendrijver researches the history of Mesopotamian astral science, mathematics, and other forms of scholarship, their cross-cultural transmission to Egypt and the Greco-Roman world, and the social and institutional context of ancient scholarship.

Tracey E. Rihll is a historian of ancient technology and science.

Francesca Rochberg is an Assyriologist and historian of ancient astronomical sciences whose research focuses on the cultures and thought-worlds of ancient knowledge.

Micah Ross is interested in the history of astronomy and computation, particularly in Egypt as a location of the cultural transmission of technical terms and practices.

Alfred Schmid currently works on the “invention” of horoscopic astrology, presumably in late Ptolemaic Egypt. His other research areas include: the concept of “Nature” and its history, Greek historiography; kingship; Ancient China in comparison; Jacob Burckhardt and cultural history, Antiquity in the light of the theories of modernization.

Glen Van Brummelen is a historian of medieval and early modern astronomy in Islamic and European cultures. He concentrates on the applications of trigonometry and other mathematical methods to solving problems in astronomical and other contexts.

James C. VanderKam works on the literature and history of second temple Judaism.  Besides editing volumes in Discoveries in the Judaean Desert, the official series for publishing the Qumran Scrolls, he has focused his research on the books of Enoch and the Book of Jubilees.

Alexandra von Lieven is a historian of religion, the sciences, the cultural history of Ancient Egypt through all periods up to Late Antiquity (with a certain focus on the Late and Greco-Roman Periods), and the hieratic texts relevant to these subjects and manuscript-cultures in general.

Institute for Egyptology and Coptology

James Wilberding is the author of Plotinus’ Cosmology (Oxford UP, 2006); Porphyry On How Embryos are Ensouled and On What is in our Power (Cornell UP, 2011); Souls, Forms and Embryos: Neoplatonists on Human Reproduction (Routledge, 2016); as well as numerous articles and chapters on ancient philosophy.

The Science in Its Contexts 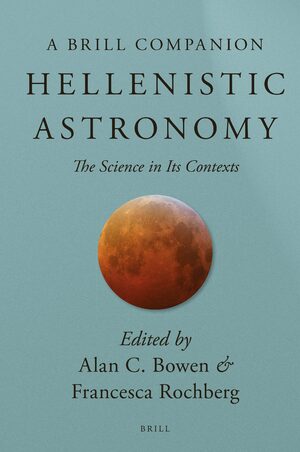