Wearing the Hero on Your Sleeve: Piecing Together the Materials of the Heraklean Myth in Late-Roman Egypt

In: Herakles Inside and Outside the Church
Author: Cary MacMahon

MacMahon surveys a corpus of woven images from late Roman Egypt (second to sixth century) depicting Herakles and his Labours, and proposes a methodology for understanding their meanings within the society which created and wore them in life and in death. MacMahon argues that these textiles should be situated within a late-antique nexus of ideas where garments can be arguments about politics, religions, philosophies and magic.

The corpus comprises tapestry-woven medallions which formed elements of decorative schema on tunics, ranging from naturalistic to highly-stylised renderings of the hero. Examination of the textile-working technologies employed (e.g. raw materials, dyes, weaving pattern-books) and the sources for the images (e.g. coinage, mosaics) demonstrates that a variety of socio-economic groupings are implicated in the consumption and manufacture of these textiles, and reveals another route by which an ubiquitous story was disseminated and re-appropriated.

Hence, MacMahon cautions against any narrow reading of these textiles as ornamental status symbols illustrating a mythology re-worked for funerary purposes, and instead suggests that they could be potent when worn in life as well as death. Focusing on images with the Nemean Lion, and drawing on current academic debate around late antique Biblical textile images, non-funerary meanings which could be accorded to these textiles in late Roman Egypt are suggested, from decorative political statement to religious argument with apotropaic potential.

Herakles Inside and Outside the Church

From the first Apologists to the end of the Quattrocento 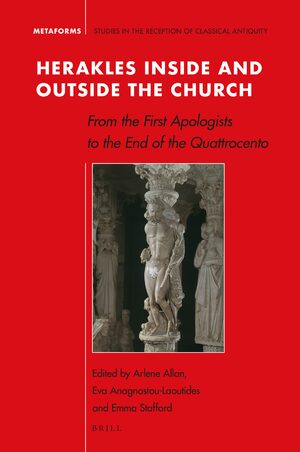