An Artful Workshop on Metamorphoses of Organic Forms

This chapter offers an account of a workshop in arts-based learning called “Metamorphoses of Organic Forms”. This detailed description of a particular practice may inform a discussion of ways in which artful approaches, in general, may come to matter in STEAM education, with implications for both educational research and practice. Added to that, the chapter argues that such art-based practices can also be relevant more widely in the context of sustainability education, such as on the theme of climate change. Precisely because the content of the art workshop at hand is not prima facie linked to it, there is an unexpected potential to take up such a tangential theme in an unusual way. Typically, participants feel invigorated to enter new territory – both spatial and mental. On a meta-level, the session can also be seen as a practice in facing complexity, uncertainty, not knowing. The chapter suggests that such artful educational practices have intrinsic merit if we are to equip new generations with skills to live in and endure “post-normal times”.

In the workshop “Metamorphoses of Organic Forms”, participants are invited to imagine how forms in nature might either evolve or disintegrate over time. The workshop lends itself to follow-up lessons in biology and natural history. The outcome is not given. Participants go through a shared process step by step, following a sequence that is outlined for them as they go along. They are encouraged to imagine how natural phenomena might grow or decay in time and they do this in a series of short sessions where they sculpt works in clay. Such a practice in art-based environmental education is arguably a form of “poor pedagogy”. This educational activity is primarily and fundamentally an open-ended process. Rather than requiring an extensive methodology, its practice requires participants to surrender themselves to a process that will be unique each time it is performed. Such a practice is an expression of a view on education that is not centred on the transmission of knowledge but rather looks at attention as education and the education of attention.

Why Science and Art Creativities Matter 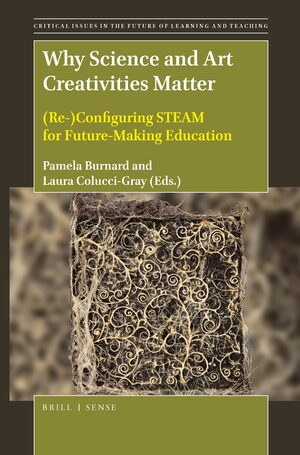