ASIA IN THE MAKING OF EUROPE, EUROPE’S HERITAGE IN ASIA AND ASIA AS EUROPE’S OTHER

This chapter looks at the ways in which Asia and Europe have interacted with, perceived and influenced one another in the past.It focuses on earlier eras of globalisation, on inter-civilisational processes of learning and on Asian responses to the import and diffusion of Western cultural and legal norms. Embracing the concept of the ‘ancient superpowers’ of Asia, what follows examines in some detail how Asia – and the powerful idea of ‘Asia’ – have been instrumental in the ‘making’ of Europe and how this has continued to shape European understandings and misunderstandings of the ‘East’. The section argues that cultural and legal diffusion constitute phenomena which have their roots firmly in the past, but which continue to shape many aspects of contemporary relations of the EU with the Asia-Pacific. The chapter emphasises, in particular, the issue of ‘legalism’ in the relations between East and West. It also sheds some light on recent and ongoing mechanisms aiming at further regional integration in Asia and Europe.

The European Union and Asia 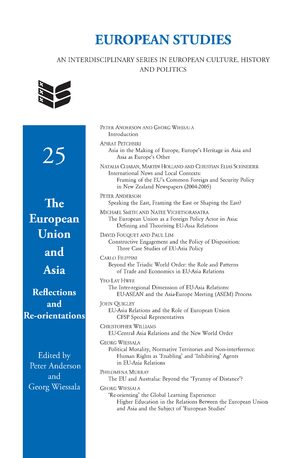