Moscow News, founded in 1930, for years represented the official English-language press organ of the Communist Party of the Soviet Union. Its establishment stemmed from a large influx of foreign, mostly American, workers who emigrated to Russia during the Great Depression. Its mastermind was American journalist and activist Anna Louise Strong, who acted in cooperation with Stalin’s cultural propagandists with the aim of providing English-speaking newcomers with an informative – and often edulcorated – view of the Soviet standards of life. Thus, throughout the years, Moscow News served as a tool of positive propaganda that the Soviet regime employed to embellish and polish its public image. As a consequence, censorship heavily affected its rhetoric, narrative, and contents, determining which issues were worthy of being reported and which ones had to be dismissed or ignored. For this reason, the newspaper is a rich resource for those who are interested in assessing the internal mechanism of the Soviet Union’s cultural diplomacy and consensus-building machine.

In the late 1940s, the newspaper and its editors became the target of Stalin’s purges. With the exacerbation of the Cold War confrontation and the worsening of the nuclear arms race, the newspaper came to represent an unnecessary open window to the regime’s internal dynamics. The newspaper’s publication was therefore interrupted between 1949 and 1956. Nevertheless, Moscow News was resuscitated during Khrushchev’s thaw. The general editorial policy of the newspaper did not change, as it continued providing a rather orthodox interpretation of the Cold War and the role of the Soviet Union in world affairs. It also continued to focus on the achievements of Russian society, covering fields ranging from sports to technology. But its structure changed completely, as it became a modern media outlet translated in as many as a dozen different languages, including Russian, and distributed worldwide. It relied on professional interpreters, translators, and copyeditors, and its style, layout, and reporting matched those of Western presses.

Content-wise, Moscow News remained substantially aligned with the Politburo’s policy, thus blaming American policy and simultaneously ignoring or underestimating crucial events in the Eastern bloc, as in the case of the Prague Spring or the revolts in Budapest. This all changed, however, with the launch of the policies of glasnost and perestroika in the 1980s, when the paper progressively endorsed a transparency campaign aimed at uncovering some of the most disturbing elements of Stalin’s reign of terror. The institutional changes that affected Russia after the end of the Cold War represented both a challenge and an opportunity for the newspaper, which moved from being Stalin’s mouthpiece to promoting democracy and the free press in Russia. Mounting criticism by Moscow News toward the current political setting in Moscow led to its definitive closure in 2014.

Substantial portions of the Moscow News Archives have been digitized in cooperation with the International Institute of Social History. For a complete list of contents, please see below under the "Downloads" tab. 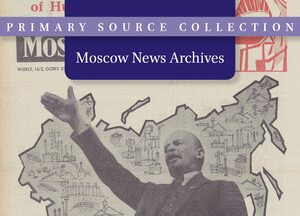 
Librarians, scholars, and educators of teaching and research institutions with programs in social history, critical sociology, and political studies. This collection is particularly relevant to those who are interested in studying Soviet Russia’s public diplomacy and propaganda. At the same time, the articles and editorials published in Moscow News are an invaluable source for the analysis of Soviet rhetoric, public debate, and the intellectual development of Russian socialism in general. Finally, due to its peculiar position and its most immediate target audience, this newspaper illuminates the many transnational and cross-cultural exchanges that have characterized the evolution of the USSR throughout the Cold War.