Rosenne's Law and Practice of the International Court: 1920-2015 Online

The popularity of his monumental and definitive works established Shabtai Rosenne as the undisputed expert on the International Court of Justice’s law and practice of his time. Irrefutably the leading work on the court, previous editions of Rosenne’s Law and Practice of the International Court have influenced generations of legal scholars, practitioners, judges, and students alike. The Fifth Edition, by Malcolm N. Shaw, combines his expertise as both an academic and practitioner to bring this monumental resource up-to-date while retaining Rosenne’s distinctive voice, erudition, and rigorous objectives.

Preserving Rosenne’s focus on the caselaw of the Court, the Fifth Edition is supplemented with increased references to the leading academic literature. This online edition provides advanced and personalized search options through its contents:

The Fifth Edition (updated through 2015) of Rosenne’s Law and Practice of the International Court is an essential component of all international law libraries and an indispensable work for those practicing in the field, who will all appreciate access to the most recent work on the Court.

Rosenne's Law and Practice of the International Court: 1920-2015, Fifth Edition is also available in print.. 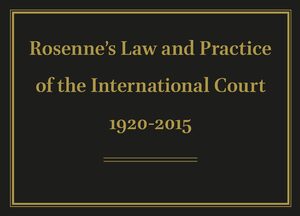 EUR  €1,767.00USD  $2,101.00
Contact Sales
Professor Malcolm N. Shaw is a practicing Barrister at Essex Court Chambers. In addition to a varied and wide international practice, he also has an extensive career in the academy. He is currently a Senior Fellow at the Lauterpacht Centre for International Law, University of Cambridge. Shabtai Rosenne was a distinguished lawyer, diplomat and teacher. He was the recipient of numerous prestigious awards including the Hague Prize for International Law in 2004.
"Shabtai Rosenne's Law and Practice of the International Court was and is the leading treatise on the World Court from the publication of its first edition in 1957 to its fourth edition in 2006. It nestled on the shelf of every judge of the Court as if it were the official analysis. It was the first and often the last work to be consulted. The Fifth Edition, expertly edited through 2016 by a distinguished scholar, Professor Malcolm N. Shaw QC, sustains the impeccable standard set by Rosenne."
~ Judge Stephen M. Schwebel, International Court of Justice


"Malcolm Shaw’s Fifth Edition of Rosenne’s Law and Practice of the International Court (1920-2015), maintains the solidity and strength of earlier editions while adding new developments and commentary. The latest edition also preserves (whatever doubts one might have) the generally positive approach to the Court’s work and future. In Rosenne’s judgement, upheld by Shaw, the Court has ‘infused new dynamism into the international law of today’. This classic work remains the essential source on the Court."
~ Judge James Crawford, International Court of Justice


"For some authors an invitation to prepare a new edition of a celebrated work by a deceased author is an opportunity to change things beyond recognition and to put the new editor centre front of the work concerned. Those who know Malcolm Shaw know this is not his style. He writes of the honour of being invited to prepare a fifth edition of Law and Practice of the International Court (1920-2015), saying that to follow in Rosenne's 'footsteps is well nigh impossible and the decision was early taken to maintain as much of Rosenne's distinctive voice, erudition and experience as possible.' He successfully does this by providing the reader with an updating - though he does admit to including more footnote references to leading academic work on the various points being covered. This innovation is welcome.

The reader using the fifth edition can do so in the knowledge that Professor Shaw has meticulously trawled, and considered how best to use, all recent practice and case law since the last edition. His work will be much appreciated by all those who still want to feel confident in making this classic work on the International Court their first port of call."
~ Dame Rosalyn Higgins


“Rosenne/Shaw is a publication of very significant importance. It treats in a very clear fashion the procedural aspects of the ICJ’s case-law, and brings much-needed clarification to many complex questions in a very orderly and scholarly manner. The current edition includes a thoughtful selection of new cases and expanded literature. Malcolm Shaw, as a leading scholar and practitioner, was singularly well-qualified to have preserved the continuing importance of this publication. The book under review offers fertile ground for academic debate, as evidenced by the discussions canvassed above over admissibility of claims.

Even in the era of the internet and easy accessibility of the case-law, such a publication is very welcome. It not only provides an in-depth analysis of the relevant case-law and related procedural questions but also gives a scholarly commentary useful to both scholars and practitioners.”
~ Malgosia Fitzmaurice, Queen Mary University of London