Textual History of the Bible Online

The Textual History of the Bible Online (THBO) is unique in providing, for the first time, a cross-searchable platform with all available information regarding the textual history, textual character, translation techniques, manuscripts, and the importance of each textual witness for each book of the Hebrew Bible, including its deutero-canonical scriptures.
In addition, it includes articles on the history of research, the editorial histories of the Hebrew Bible, as well as other aspects of text-critical research and its auxiliary fields, such as papyrology, codicology, and linguistics.

The Textual History of the Bible Online is also available in print.

Features and benefits:
• Full Text Search and Advanced Search options helping you find any concept you may be looking for.
• Fully cross-referenced.
• Cross-searching with other Brill online products, e.g. the Dead Sea Scrolls Online. • All articles will be published in print and online. Those online but not yet in print may still receive light copy editing. 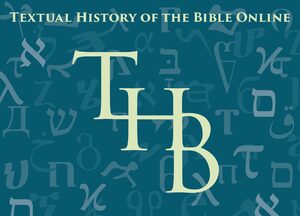 In volume 1, Emanuel Tov was the responsible editor for the primary versions as well as the Samaritan Pentateuch and the Masoretic text including the corresponding overview articles. Armin Lange had the editorial responsibility for the ancient Hebrew biblical texts, the secondary translations, and for the Biblical text as attested in ancient literature, including their corresponding overview articles. In addition Emanuel Tov was responsible for entries 1.1.1 and 1.2.3 while Armin Lange worked on entries 1.1.2; 1.2.1; 1.2.2; 1.4; 1.7.1 and 1.7.2.

Armin Lange is professor for Second Temple Judaism at the University of Vienna, the Director of Vienna University's Institute for Jewish Studies, a member of the International Team editing the Dead Sea Scrolls, and a corresponding member of the Austrian Academy of Sciences. He has published extensively on the Hebrew Bible, its textual criticism, Second Temple Judaism, and the Dead Sea Scrolls.
Emanuel Tov, Hebrew University, Jerusalem is J.L. Magnes Professor of Bible emeritus at that University. He has published many monographs on the textual criticism of the Hebrew Bible and Qumran, and was the editor-in-chief of the Dead Sea Scrolls publication project. He is a Fellow of the British Academy and a member of the Israel Academy of Sciences.
Matthias Henze is the Isla Carroll and Percy E. Turner Professor of Hebrew Bible and Early Judaism at Rice University and the director of Rice's program in Jewish Studies. The focus of his published work is on the Jewish literature composed around the turn of the Common Era.
Russell Fuller joined the faculty of the Department of Theology and Religious Studies at the University of San Diego in 1992. He is a professor of biblical studies with a specialty in the area of Hebrew Bible and the Dead Sea Scrolls. He is a member of the International Team editing the Dead Sea Scrolls.
Mika S. Pajunen is Academy of Finland’s Research Fellow at the University of Helsinki (2020-2025) with his project: “Textual Plurality in the Dead Sea Scrolls: Moving beyond ‘Non-Aligned,’” and a member of three international re-edition projects of the Dead Sea Scrolls (DJD I, III, and V). He has published extensively on Second Temple Judaism and the Dead Sea Scrolls.
Marilyn Lundberg is Associate Director of the West Semitic Research Project at the University of Southern California, and Associate Director for Ingest/Cataloguing of the InscriptiFact Project. She is an Affiliate Associate Professor at Fuller Theological Seminary in Pasadena. She has published in the fields of Northwest Semitics, and in digital technology and image distribution.
Frank Feder is senior academic researcher and project coordinator of the academy project Complete Digital Edition and Translation of the Coptic-Sahidic Old Testament at the Göttingen Academy of Sciences and Humanities. His research focuses on the Coptic translations of the Bible as versions of the Septuagint. He published extensively on the Coptic bible and is the author of Biblia Sahidica Ieremias, Lamentationes (Threni), Epistula Ieremiae et Baruch (DeGruyter, 2002).
Richard D. Weis is Dean and Professor Emeritus of Hebrew Bible at Lexington Theological Seminary in Lexington, Kentucky, and is co-chair of the Editorial Committee for Biblia Hebraica Quinta. He has published numerous articles on textual criticism of the Hebrew Bible and the two ancient text forms of the book of Jeremiah. He is preparing the volumes on Jeremiah for Biblia Hebraica Quinta and the Hebrew Bible: A Critical Edition.
Introduction to the Textual History of the Bible