Editors-in-Chief: Juan Carlos Moreno García, Ellen Morris, and Gianluca Miniaci
The Journal of Egyptian History aims to encourage and stimulate a focused debate on writing and interpreting Egyptian history ranging from the Neolithic foundations of Ancient Egypt to its modern reception. It covers all aspects of Ancient Egyptian history (political, social, economic, and intellectual) and of modern historiography about Ancient Egypt (methodologies, hermeneutics, interplay between historiography and other disciplines, and history of modern Egyptological historiography).
The journal is open to contributions in English, German, and French.

NOW AVAILABLE - Online submission: Articles for publication in the Journal of Egyptian History can be submitted online through Editorial Manager, please click here. 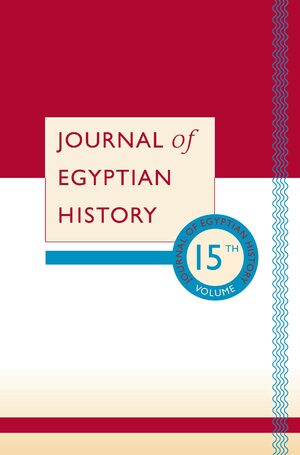 Gianluca Miniaci, PhD (2008, University of Pisa), is Senior Researcher in Egyptology at the University of Pisa, Honorary Researcher at the Institute of Archaeology, UCL – London, and Chercheur associé at the École Pratique des Hautes Études, Paris. His main research field is concerns the material culture of ancient Egypt, with particular interest in cultural and socio-economic transformations during the Middle Bronze Age (2100-1550 BC). Some of his main publications include Company of Images: Modelling the Imaginary World of Middle Kingdom Egypt, Leuven 2017; The Arts of Making in Ancient Egypt. Voices, Images, and Objects of Material Producers 2000–1550 BC, Leiden 2018.

Ellen Morris, PhD (2001, University of Pennsylvania), is an Assistant Professor in the Classics and Ancient Studies Department at Barnard College, Columbia University. She has published extensively on issues pertinent to ancient Egyptian imperialism including The Architecture of Imperialism: Military Bases and the Evolution of Foreign Policy in Egypt’s New Kingdom (Brill, 2005) and, most recently, Egyptian Imperialism (forthcoming in 2018). Her ongoing research interests and other publications focus on the dynamics of political fragmentation, state formation, sexuality and sacred performance, retainer sacrifice, island theory, and divine kingship. She has excavated in the Nile Valley at Abydos and Mendes, and at the site of Amheida in the Dakhleh Oasis.