Editor-in-Chief: Marcel Danesi
[As of 2021, Brill Research Perspectives in Popular Culture will no longer be published as a journal by Brill but will continue as a book series.]

The expression “popular culture” alludes, essentially, to a form of culture that makes little, if any, categorical distinctions between “high or serious culture” and “low or entertainment culture,” making it historically a non-traditional form of culture. In the evolution of human cultures, popular culture stands out as atypical, since it takes cultural material from any source and revamps it according to the laws of the marketplace. In contrast to historical (traditional) culture, it rejects both the supremacy of tradition and of established cultural norms, as well as the pretensions of intellectualist tendencies within contemporary artistic cultures. Popular culture has always been highly appealing for this very reason, bestowing on common people the assurance that cultural trends are for everyone, not just for an elite class of artists and cognoscenti. It is thus populist, unpredictable, and highly ephemeral, reflecting the ever-changing tastes of one generation after another. Moreover, among the ephemeral trends and texts, there are some that have risen to the level of high art, hence the paradox and power of popular culture.

Brill Research Perspectives in Popular Culture is a peer-reviewed, hybrid journal and reference publication that features studies exploring all aspects of popular culture today, from its traditional platforms, audiences and traditional electronic media, to the contemporary digital media. Each issue comprises a single, uniquely focused short monograph that examines some particular aspect, text, or event that falls under the rubric of “pop culture,” including popular programs (sitcoms, adventure series, etc.); celebrities; fads; theories of the popular imagination; the relation of popular culture to other cultures; the role of memetic culture vis-à-vis traditional forms of culture; the nature of performance; the psychological, anthropological, and semiotic aspects of popular culture systems; and the like. In addition, studies will also look at specific frameworks for analyzing popular culture, such as archetype theory and carnival theory. 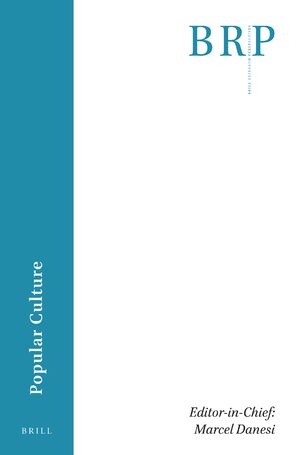 
Marcel Danesi is Full Professor of Anthropology and Semiotics at the University of Toronto. He has written extensively in semiotics and especially in the applications of semiotic principles to popular culture.