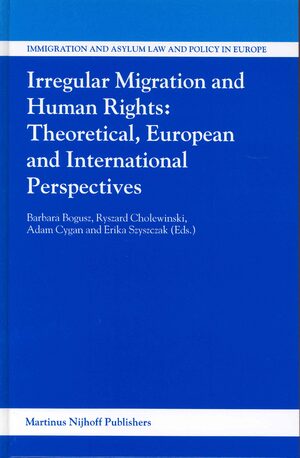 Editors: Barbara Bogusz, Ryszard Cholewinski, Adam Cygan and Erika Szyszczak
Desperate and vulnerable people, who take enormous risks to migrate to Europe in rickety boats or concealed in the containers of articulated lorries, are familiar images portrayed in the media of “irregular migrants”. Irregular migration has become a major political concern both at the European level and in the wider international context. In the European Union, politicians have identified irregular migration as a “problem” and have given priority to preventing this phenomenon in the development of the common asylum and immigration policy.
This collection of essays is the outcome of an international conference on Irregular Migration and Human Rights, which gathered together prominent scholars, policy-makers and practitioners working in the migration and human rights field. The objective of the book, in contrast to the prevailing political approach which focuses almost solely on prevention, is to discuss the human rights dimensions of irregular migration from theoretical, European and international perspectives. The book is divided into five substantive parts: the complex question of who is an irregular migrant and the difficulties in assessing the size of irregular movements: official and popular perceptions of irregular migrants, a debate which is frequently considered in terms of security concerns, asylum, and human trafficking and smuggling; the myriad strands of the developing EU law and policy on irregular migration, such as the adoption of readmission agreements, and the relationship of this law and policy to external border controls in the context of EU enlargement and other non-legal means of EU decision-making; the contributions of international and non-governmental actors to charting a rights-based approach to irregular migration; and the problems these vulnerable persons face while resident in host countries, such as discrimination and denial of access to social rights and public services, which is inextricably bound up with their irregular status.
Hardback