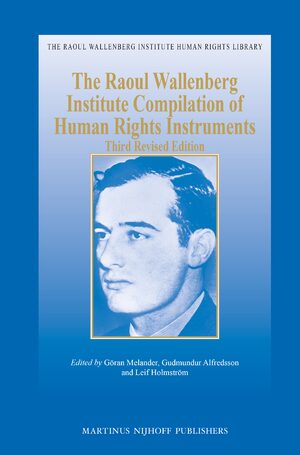 Editors: Göran Melander, Gudmundur Alfredsson and Leif Holmström
In 1997, The Raoul Wallenberg Institute Compilation of Human Rights Instruments was published by Martinus Nijhoff Publishers as the first volume in the series “The Raoul Wallenberg Institute Human Rights Library”. In 2004, the second edition of that Compilation was published, and the present publication is the third, revised edition of the book.
Since the second edition of the Compilation went out of print, major human rights treaties have entered, or are about to enter, into force, and a number of non-treaty instruments have been adopted. The dynamic development in international human rights law and the increasing number of instruments have brought about a revision in the selection of instruments to be included in this new edition of the Compilation. Like in the previous editions, the selection of instruments is based on the experience acquired by staff of the Raoul Wallenberg Institute; most of the reproduced texts are the subject of frequent references in courses, seminars and workshops organized by the Institute. The chosen treaties and non-treaty instruments are either universal or regional; some of them are of a general nature while others have specific or specialized contents. They cover, among others, civil, political, economic, social, cultural and solidarity rights
E-Book