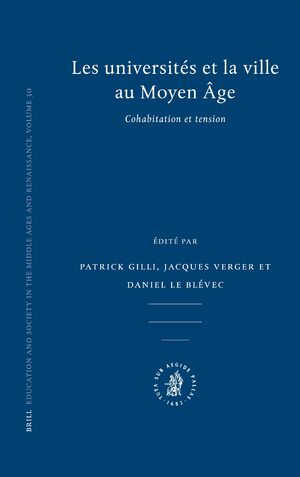 Authors: Patrick Gilli, Jacques Verger, and Daniel Le Blévec
In the Middle Ages, the presence of a university was a source of prestige, allure and human resources for the host town, to the extent that urban authorities sought to prevent any attempt to secede to another city. However, if the benefits of a university seemed obvious (although some major cities in medieval Europe never had one, nor sought to have one), the risks of its presence were not negligible: trouble and disorder, the privileges of the students and the Masters, etc. This book seeks to make an assessment, on a European scale, of the various ways in which the university was integrated into the city: in urban respects as much as cultural, the Studium generale marked its town, and the members of the university were often used by local institutions to be drawn upon as if from a fish pond. Contributors are: Angel Vaca Lorenzo, José Martin Martin, Carlos Heusch, Jacques Verger, Jürgen Miethke, Robert Gramsch, Karl Ubl, Sante Bortolami, Elda Forin, Carla Frova, Patrick Gilli, Nathalie Gorochov, Julian Munby, Olivier Marin and Maria Helena da Cruz Coelho.
E-Book (PDF)

Index Nominum
Index Locorum
All those interested in medieval studies, in history of universities; in urban studies.