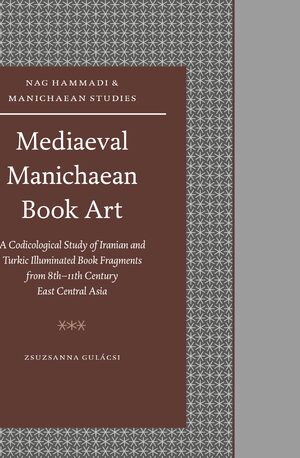 Author: Zsuzsanna Gulácsi
Mediaeval Manichean Book Art focuses on a corpus of c. one hundred fragments of exquisitely illuminated manuscripts that were produced under the patronage of the Turkic-speaking Uygurs in the Turfan region of East Central Asia between the 8th and 11th centuries CE, and used in service of the local Manichaean church. By applying a codicological approach to the analysis of these sources, this study casts light onto a lost episode of Central Asian art history and religious book culture.
Each of the five chapters in this book accomplishes a well-defined goal. The first justifies the formation of the corpus. The second examines its dating on the basis of scientific and historical evidence. Chapter three assesses the artistry of their bookmakers, scribes, and illuminators. The fourth documents the patterns of page layout preserved on the fragments. The final chapter analyses the contextual relationship of their painted and written contents.
Mediaeval Manichaean Book Art represents a pioneer study in its subject, research methodology, and illustrations. It extracts codicological and art historical data from torn remains of lavishly decorated Middle-Persian, Sogdian, and Uygur language manuscripts in codex, scroll, and “palm-leaf” formats. Through detailed analyses and carefully argued interpretations aided by precise computer drawings, the author introduces an important group of primary sources for future comparative research in Central Asian art, mediaeval book illumination, and Manichaean studies.
Hardback

€75.00$91.00
Paperback
Add to Cart
Zsuzsanna Gulácsi, Ph.D. in Art History and Central Eurasian Studies, is Assistant Professor of Art History at Northern Arizona University.
"This is a superb study which is richly illustrated by a range of images - many in colour. [...] This volume casts light on the wider phenomenon of Manichaesanism by using the material remains of one signigican community to gain insight into the artistic and textual practices of theat group.This is a highly significant volume that makes a major contribution to manichaen studies." – Paul Foster, University of Edinburgh, in: The Expository Times 121 (2009)
Preface
Introduction

I. The Corpus of Manichaean Book Art
II. The Dates of the Remains
III. Artistry of Book Makers, Scribes, and Illuminators
IV. Patterns of Page Arrangements
V. The Written and Painted Message