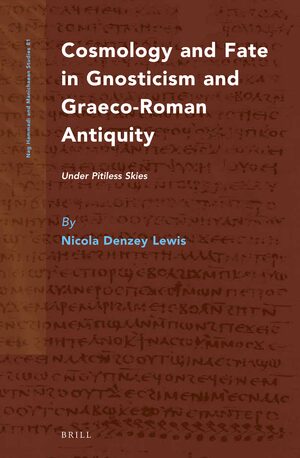 Cosmology and Fate in Gnosticism and Graeco-Roman Antiquity

Author: Nicola F. Denzey
In Cosmology and Fate in Gnosticism and Graeco-Roman Antiquity, Nicola Denzey Lewis dismisses Hans Jonas' mischaracterization of second-century Gnosticism as a philosophically-oriented religious movement built on the perception of the cosmos as negative or enslaving. A focused study on the concept of astrological fate in “Gnostic” writings including the Apocryphon of John, the recently-discovered Gospel of Judas, Trimorphic Protennoia, and the Pistis Sophia, this book reexamines their language of “enslavement to fate (Gk: heimarmene)” from its origins in Greek Stoicism, its deployment by the apostle Paul, to its later use by a variety of second-century intellectuals (both Christian and non-Christian). Denzey Lewis thus offers an informed and revisionist conceptual map of the ancient cosmos, its influence, and all those who claimed to be free of its potentially pernicious effects.
E-Book (PDF)

€115.00$150.00
​
Add to Cart
Nicola Denzey Lewis, Ph.D (1998), Princeton University, is Visiting Associate Professor in Religious Studies at Brown University. A specialist in Gnosticism, her publications include Introduction to 'Gnosticism': Ancient Voices, Christian Worlds (New York: Oxford University Press, 2012).
"focused study that seeks to rebut the characterisation of second-century Gnosticism as a religious philosophy that apprehends the universe as an enslaving force. [...] a rich study, which offers a new way of thinking about the concept of face in Gnostic texts. ...it promises to be a valuable and provocative contribution." – Paul Foster, University of Edinburgh, in: The Expository Times 126/2 (2014)
"...concise and convincing, [...] the book is clearly-argued [...]. Its critical engagement with the research of the old school dispels scholarly myths and provides a new starting point for debate about how we are to understand the problems of fate, providence, and salvation in late ancient religious life.[...] worthwhile reading not just for students of Gnostic and Hermetic literature, but the New Testament, early Christian studies, and religion in the later Roman Empire as well." – Dylan Burns, Leipzig University, in: Numen 61 (2014)
"...excellent overview of the primary sources whilst producing numerous thought-provoking arguments [...] It is a useful book for anyone interested in second-century thought patterns and is suitable for a wide audience with a range of interests." – Sarah Parkhouse, Durham University, in: Reviews of Biblical and Early Christian Studies ( RBECS.org)
1. Were the Gnostics Cosmic Pessimists?

2. Nag Hammadi and the Providential Cosmos

3. This Body of Death: Cosmic Malevolence and Enslavement to Sin in Pauline Exegesis

4. Heimarmene at Nag Hammadi: The Apocryphon of John and On the Origin of the World

6. Ways Out I: Interventions of the Savior God

8. Astral Determinism in the Gospel of Judas

9. Conclusions, and a New Way Forward

Those interested in placing Gnosticism within the context of the intellectual history of the Roman Empire and scholars of emergent Christianity and the religions of Graeco-Roman antiquity.