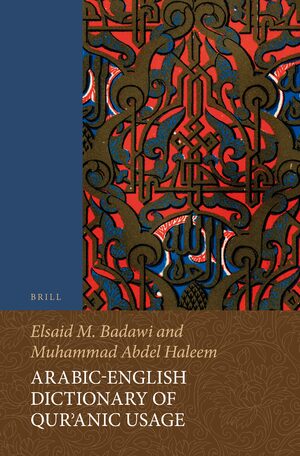 Authors: Elsaid Badawi and Muhammed Abdel Haleem
The Qur'an is the living source of all Islamic teaching, and is of singular importance to those interested in Islam and the study of religions. Despite this, there exists a long-felt lack of research tools for English first-language speakers who wish to access the Qur'an in the original Arabic.
The Dictionary of Qur'anic Usage is the first comprehensive, fully-researched and contextualised Arabic-English dictionary of Qur'anic usage, compiled in accordance with modern lexicographical methods by scholars who have a lifelong immersion in Qur'anic Studies. Based on Classical Arabic dictionaries and Qur'an commentaries, this work also emphasises the role of context in determining the meaning-scatter of each vocabulary item. Illustrative examples from Qur'anic verses are provided in support of the definitions given for each context in which a particular word occurs, with cross-references to other usages. Frequently occurring grammatical particles are likewise thoroughly explained, insofar as they are used in conveying various nuances of meaning in the text.

Muhammad Abdel Haleem, Professor of Islamic Studies, University of London. Educated at al-Azhar, Cairo and Cambridge Universities, Professor Abdel Haleem is currently Director of the Centre of Islamic Studies, and Chief Editor of the Journal of Qurʾanic Studies. Recent publications include: Understanding the Qurʾān: Themes and Style (2001), and The Qurʾān: a New Translation (2004).

"As a treasure trove of etymological, grammatical, phonological, theological, and historical information relating to the Qur'an, it surpasses the heretofore standard, J. Penrice's Dictionary and Glossary of the Koran (1873)". Essential. Choice, July 2008
World Prize for the Book of the Year of the Islamic Republic of Iran, 2010

“…this monumental effort has filled an important intellectual lacuna in the discourse on the Qurʾān, as it provides a detailed exploration of the idioms and usage of the Scripture with a remarkable exhibition of an archaeologist’s obsession with details and finesse.”
Amidu Olalekan Sanni in Die Welt des Islams 52 (2012), pp. 207-208