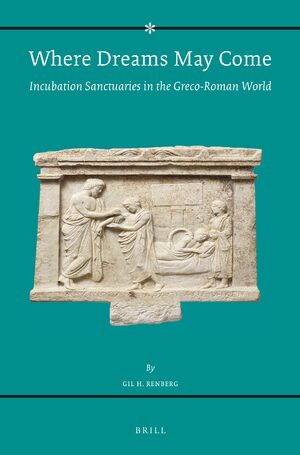 Where Dreams May Come (2 vol. set)

Incubation Sanctuaries in the Greco-Roman World

Author: Gil Renberg
Where Dreams May Come was the winner of the 2018 Charles J. Goodwin Award of Merit, awarded by the Society for Classical Studies.

€243.00$292.00
​
Add to Cart
Gil H. Renberg, Ph.D. (2003), who has taught at Harvard, Johns Hopkins and Washington University in St. Louis, is an American ancient historian and classicist whose work primarily focuses on the religious beliefs and practices of the Greeks and Romans, especially those revealed by material culture.
"The work is a thorough and masterful study which adds significantly to our understanding of incubation and raises questions regarding what this practice can tell us more broadly about divination, religion, and medicine in the ancient world."
Rebecca van Hove, Collège de France / Université de Liège, Kernos 32, 2019.

"The discovery of inscriptions at Epidauros containing dream narratives and healing miracles and their publication in 1883 drew the attention of historians of religion to the ancient practice of incubation and exercised significant influence on early psychoanalysis. Although the importance of incubation has often been studied in connection with the cult of Asklepios, no comprehensive study of this phenomenon in the Greek and Roman world had ever been attempted. Gil H. Renberg’s book not only fills this gap but also presents a comparison with other early cultures in the eastern Mediterranean and the Near East, as well as the early Christians. The systematic collection of the textual and archaeological sources and their thorough analysis make this book an indispensable reading for scholars working on ancient religious experience, religious healing, dreams, and divination." - Angelos Chaniotis, Professor, School of Historical Studies, Institute for Advanced Study
"It is not often that a scholar embarks upon a project of such breadth as the one that Renberg took upon himself with his monograph—and even rarer is to see such a feat be carried out with success (...) everybody will have to agree about the overall outstanding quality and usefulness of Renberg’s work (...) Renberg’s work is not intended to be the final study on incubation, but it surely is—and will for long remain—the final reference tool for any further investigation on the subject." - Luigi Prada, University of Oxford, in: Bibliotheca Orientalis LXXVI 1-2 (January-April 2019)
"(...) this is an extremely useful and comprehensive study and will be a must-read for those interested in incubation in the ancient world. The author should be applauded for producing an exhaustive treatment of an important religious phenomenon in the cultures of the ancient Mediterranean, which discusses and evaluates evidence ranging from the third millennium BC until late antiquity." - Ivana Petrovic, University of Virginia, in: Greece & Rome 65.1 (2018)
"Het tweeledige boekwerk van Renberg is (...) zeer bruikbaar als naslagwerk, omdat Renberg zowat alle bronnen kritisch heeft beschouwd." - Mark Beumer, in: Kleio-Historia, March 2018
"This impressive book provides an encyclopaedic discussion of mantic and therapeutic dreams (...) Many of the chapters supply insights not available elsewhere (...). An extensive index caps this Meisterwerk". - Markham J. Geller, in: Journal for the Study of the Old Testament 42.5 (2018)
"This book, like the phenomenon of incubation itself, is rich and dense, capturing great variation across time and geographic space... None will deny the value and magnitude of this study." - Jessica L. Lamont, Yale University, in: The Classical Review, 2018
"Gil Renberg has done the field an incredible service with the publication of this monumental and far-reaching study (...) this reviewer has no doubt that Renberg’s book will become the standard discussion on the subject for decades to come." - Megan Nutzman, Old Dominion University, in: Bryn Mawr Classical Review
"The book is a wonderful presentation and analysis of a vast material, providing a solid basis for further studies on Greco-Roman, as well as Egyptian, healing cults and divinatory techniques, not only incubation." - Hedvig von Ehrenheim, Uppsala University, in: Opuscula: Annual of the Swedish Institutes at Athens and Rome 10 (2017)

Primarily specialists in Greek and Greco-Egyptian religion, but also experts in the Ancient Near East, Pharaonic Egypt, and early Judaic and Christian studies. University and seminary libraries.