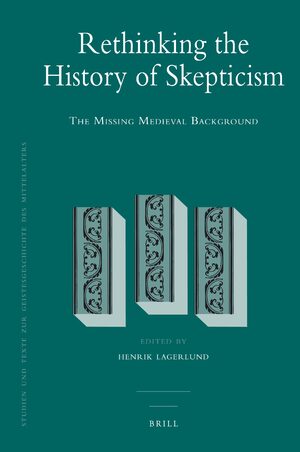 Rethinking the History of Skepticism

€115.00$144.00
​
Add to Cart
Henrik Lagerlund, Ph.D. (1999) in Philosophy, Uppsala University, is Associate Professor of Philosophy at the University of Western Ontario. He has published extensively on medieval philosophy including Modal Syllogistics in the Middle Ages (Brill, 2000), and among his edited books are Forming the Mind (Springer 2007) and Representation and Objects of Thought in Medieval Philosophy (Ashgate 2008). He is the editor-in-chief of the Encyclopedia of Medieval Philosophy (Springer, forthcoming 2010).
Preface
List of Contributors

A History of Skepticism in the Middle Ages
Al-Ghazali's Skepticism Revisited
Henry of Ghent and John Duns Scotus on Skepticism and the Possibility of Naturally Acquired Knowledge
Ockham's Reliabilism and the Intuition of Non-Existents
Nicholas of Autrecourt's Skepticism: The Ambivalence of Medieval Epistemology
The Anti-Skepticism of John Buridan and Thomas Aquinas: Putting Skeptics in Their Place versus Stopping Them in Their Tracks
Does God Deceive Us? Skeptical Hypotheses in Late Medieval Epistemology
Skeptical Issues in Commentaries on Aristotle's Posterior Analytics: Joh Buridasn and Albert of Saxony
A Buridianina Response to a Fourteenth Century Skepitical Argument an dits Rebuttal by a New Argument in the Early Sixteenth Century

Index of Names
All those interested in the history of philosophy, history of skepticism, medieval Arabic and Latin philosophy.