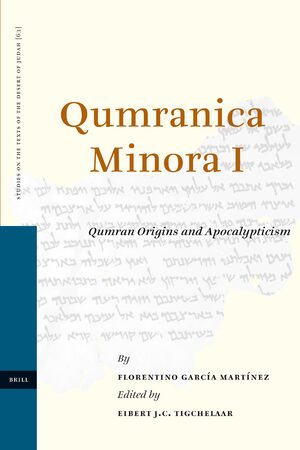 Editor: Tigchelaar
Author: Florentino García Martínez
Qumranica Minora I: Qumran Origins and Apocalypticism brings together the author’s much discussed articles on the so-called “Groningen Hypothesis” (an hypothesis about the origins of the Qumran Community in relation to the parent Essene movement and Palestinian apocalyptic movements), as well as a selection of his most important essays on Early Jewish and Qumran apocalypticism. The third part of the book consists of surveys of the history of research on the Dead Sea Scrolls. The volume includes English translations of essays that were originally written in Spanish and French.
E-Book (PDF)

€188.00$233.00
​
Add to Cart
Florentino García Martínez, a pre-eminent specialist of Qumran Studies, is Professor at the Universities of Groningen and Leuven. He is a member of the International Team of Editors of the Dead Sea Scrolls and editorial secretary of the Revue de Qumran and the Journal for the Study of Judaism. García Martínez has written numerous books and articles on the Dead Sea Scrolls.
Eibert J.C. Tigchelaar, (Ph.D. 1994, University of Groningen, the Netherlands) is Professor at the Department of Religion, Florida State University. He is secretary of the Journal for the Study of Judaism, associate editor of the Brill series Studies on the Texts of the Desert of Judah, and executive secretary of the International Organization for Qumran Studies.

the readership of the STDJ, and scholars working on Second Temple Judaism