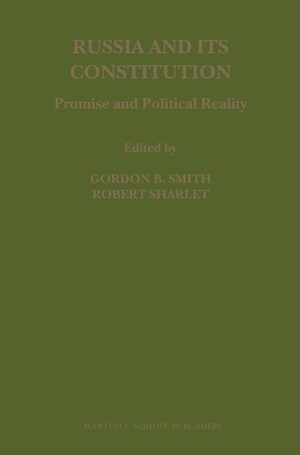 Russia and its Constitution

Editors: Robert Sharlet and Gordon Smith
The Constitution of the Russian Federation was ratified in 1993 amid great hopes and aspirations following the collapse of the USSR. The constitution proclaims the goal of establishing a “democratic, federal state” that functions according to rule of law and promises a broad array of social, political and economic rights to its citizens. But how well has the Russian government lived up to realizing these promises? Seven distinguished scholars on Russian politics and law examine the state of political accountability, federal power-sharing, judicial independence, press freedom, and criminal procedure in Russia today. The picture that emerges is decidedly mixed; they conclude that the Russian constitution remains a work in progress.
E-Book

Introduction: The Promise of the Russian Constitution
Gordon B. Smith

Chief Justices of the Constitutional Court of the Russian Federation: 1990 to the Present

Students and scholars of Russian politics, law and society, as well as people interested in comparative politics, and comparative law and constitutions.