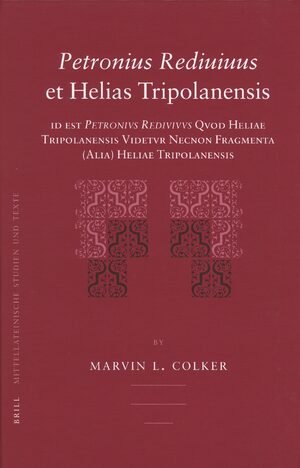 Author: Marvin L Colker
Elias of Thriplow, a village near Cambridge, was a schoolmaster in the thirteenth century. Apart from his complete Serium Senectutis, he wrote several works that have survived only as extracts, many of which are extensive. Elias seemingly wrote what has been called Petronius Rediuiuus, a collection of tales and of essays about knights, merchants, women, and farmers. This collection frequently reflects the influence of spicy Petronius, rarely read in the Middle Ages. Elias is important for his criticisms of medieval society, for the history of narrative literature, and for the history of English humanism.
This new book offers the first critical edition of all the extracts from Elias and publishes many of these for the first time, with commentary indicating sources for the ideas and language.
E-Book

€112.00$140.00
​
Add to Cart
Marvin L. Colker, Ph.D. (1951, Harvard University) and Litt.D. h.c. (1987, Trinity College Dublin), is Professor Emeritus of Classics at the University of Virginia. He has published about eighty papers and four books on medieval texts and manuscripts.
Introduction