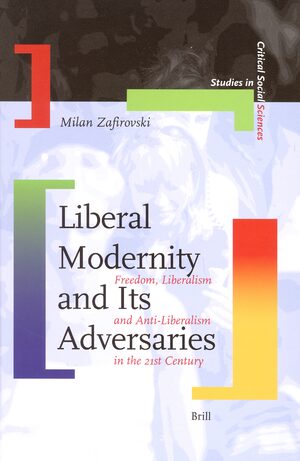 Liberal Modernity and Its Adversaries

Freedom, Liberalism and Anti-Liberalism in the 21st Century

Author: Milan Zafirovski
This is a book about modern liberal society and its adversaries. The book rediscovers and rehabilitates much maligned, especially in America, liberalism as the ideal system of liberty in relation to anti-liberalism as one of un-freedom. It rediscovers liberal modernity as a free, equal and just social system and time, thus most compatible with and enhancing of human civilization ushering in the 21st century. It exposes anti-liberal adversaries, especially conservatism, as ideologies and systems most inappropriate with and destructive of civilization. The book rediscovers liberal modernity as the master process and destination of Western civilization, and its anti-liberal adversaries, notably conservatism, as the ghosts of a dead past. The anti-liberal rumors of the ‘death’ of liberalism are ‘greatly exaggerated’.
E-Book (PDF)

€130.00$161.00
​
Add to Cart
Milan Zafirovski, Ph.D. (1990) in Economics, University of Saint Cyril and Methodius, Macedonia, Ph.D. (1999) in Sociology, Florida International University, is Associate Professor of Sociology at University of North Texas. He has published several books, including Market and Society (Praeger, 2003).
Recommended by CHOICE (April 2008)
1. INTRODUCTION
Studying Liberal Society and Modernity 1
Liberal Modernity: Realization of the Perennial Quest for Liberty 7
Concept and Reality of Liberal Modernity 14
Liberalism: Idealism and Institutionalism of Liberty 24
The Ideal and Social System of Liberty, Equality and Justice 29
Synthesis of Liberty and Equality: Freedom and Egalitarianism 29
Synthesis of Liberty and Justice: Freedom and Equity 39