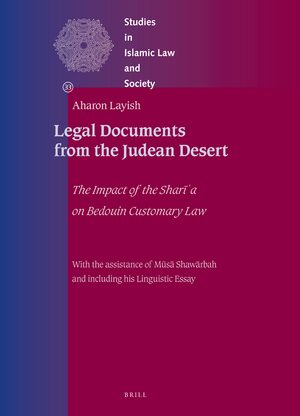 Legal Documents from the Judean Desert

The Impact of the Shari'a on Bedouin Customary Law

Author: Aharon Layish
This volume presents annotated English translations of 74 awards handed down by tribal arbitrators and other legal documents obtained from the Bedouin of the Judean Desert. The documents address such legal issues as blood and sexual offenses, family disputes, inheritance, private transactions in land and water rights, tribal boundaries, contracts and obligations. The documents, some of which date back to the 19th century, provide vital information on the process of Islamization of the tribal customary law in the precinct of the tribal judge.
The facsimile reproductions of the manuscripts are included, rendering direct access to the original documents. The study is intended for students of Islamic law, of customary law and of comparative law, and historians interested in the legal, social and economic history of modern Palestine and Jordan. A linguistic essay, by Dr. Mūsā Shawārbah, based on the Bedouin documents, appears at the end of the study.
E-Book (PDF)

AHARON LAYISH, Ph.D. (1973), Professor Emeritus, Hebrew University of Jerusalem, has published extensively on Islamic, Druze and tribal law, including: Sharīʿa and Custom in Libyan Tribal Society (Leiden, 2005). He was President of The Israel Oriental Society (2004-6); He currently is a member of the editorial board of Islamic Law and Society (Brill).
“…a highly interesting study both of law history and of the tribal societies.”
Sotirios S. Livas in Journal of Oriental and African Studies 24 (2015) 488-489.

Students of Islamic law, of customary law and of comparative law, and historians interested in the legal, social and economic history of modern Palestine and Jordan as well as Arabists.