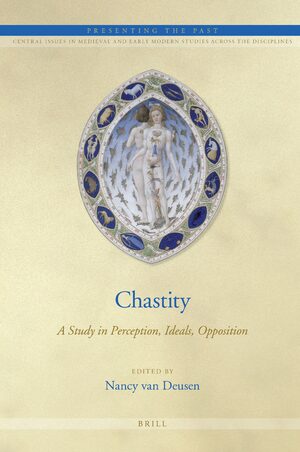 A Study in Perception, Ideals, Opposition

Author: Nancy van Deusen
Chastity as a topic is an ideal interdisciplinary consideration since it accesses iconographical representation, the philosophical issues of purity, morality, and of innocence; the legal issues of loss and punishment, the historical issues of celibacy, and the legislation that topic evoked; as well as the role of chastity as a literary topos in Late Antiquity as well as the Middle Ages, for example, in medieval commentary traditions and within medieval vernacular literatures. The topic of Chastity, as well as its opposing characteristics, thus provides an arena for a discussion of the transmission of Ovid and the commentaries this author provoked in the Middle Ages, the interpretation of images illustrating legal texts, cross-cultural enquiries, such as the reciprocity between Christian, Muslim, and Judaic interpretations of temperance, continence, and abstinence, and the theological-legal issue of “God’s rights” (in excising Adam and Eve from the Garden of Eden). Contributors: Nancy van Deusen; Frank T. Coulson; Marcia L. Colish; Uta-Renate Blumenthal; Thérèse-Anne Druart; Claudia Bornholdt; Susan L’Engle; Cristian Gaspar; and Rafael Chodos.
E-Book (PDF)

€118.00$148.00
​
Add to Cart
Nancy Van Deusen Ph.D. (l972) in Musicology, Indiana University, Bloomington, is Professor of Musicology, Benezet Professor of the Humanities, Claremont Graduate University, and is Director of the Claremont Consortium in Medieval and Early Modern Studies, Claremont Colleges and Graduate University, Claremont, California, USA. She has published extensively on music within the medieval city of Rome, music within medieval cathedrals, the medieval sequence within its Latin codicological and paleographical contexts as well as its significance for the history of ideas; music as medieval science and within the curriculum of the early university.
Nancy van Deusen: Introduction

1. Frank T. Coulson: Failed Chastity and Ovid: Myrrha in the Latin Commentary Tradition from Antiquity to the Renaissance
2. Marcia L. Colish: Ambrose of Milan on Chastity
3. Uta-Renate Blumenthal: The Prohibition of Clerical Marriage in the Eleventh Century
4. Thérèse-Anne Druart: An Arab Christian Philosophical Defense of Religious Celebacy against its Islamic Condemnation: Yahyā ibn 'Adī
5. Susan L’Engle: Depictions of Chastity: Virtue Made Visible
6. Claudia Bornholdt: What Makes a Marriage: Consent or Consummation in Twelfth-Century German Literature
7. Cristian Gaspar: “The Spirit of Fornication, Whom the Children of the Hellenes Used to Call Eros:” Problematizations of Male Homoeroticism in Late Antique Monastic Milieux
8. Rafael Chodos: The Cry of Eden