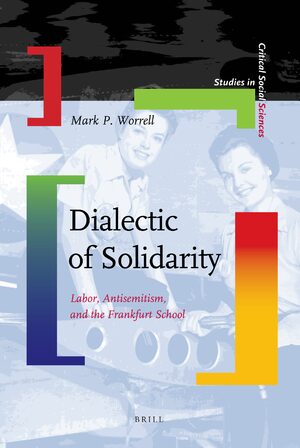 Labor, Antisemitism, and the Frankfurt School

Author: Mark Worrell
During World War II it appeared that American workers in uniform had all that was required to defend democracy on the battlefields yet, on the domestic front, the working class, as it turned out, was ideologically inconsistent when it came to democracy. Could battles against tyranny be won abroad only to lose the war back home? This was the question the Institute of Social Research (the famous “Frankfurt School”) asked in 1944 when it embarked upon an important study of the American working class. Dialectic of Solidarity draws upon unpublished research reports of the Frankfurt School and represents a unique and multidimensional view of the political imagination of the wartime American worker and the role of antisemitism as the 'spearhead of fascism.'
E-Book (PDF)

€130.00$161.00
​
Add to Cart
Mark P. Worrell, Ph.D. (2003) in Sociology, University of Kansas, is Assistant Professor of Sociology at SUNY Cortland.
[…] Mark Worrell’s Dialectic of Solidarity […] examines the Institute’s [Institute for Social Research] massive empirical research project on antisemitism among American workers during World War II. The project, which was based on interviews with over 900 workers mainly in wartime industrial centers such as Los Angeles, San Francisco, and Detroit, was carried through to completion but was never published and thus remains virtually unknown today. Worrell’s book, which is the only full-length study of the project in any language, fills this large gap in our knowledge of the history of the Frankfurt School and makes an important contribution to the much needed reassessment […] of the crucial role of empirical social research in Critical Theory.
John Abromeit, The Journal of Modern History, Vol. 85, No. 1 (March 2013), pp. 161-168
Acknowledgements
List of Abbreviations
Preface
Introduction
1. Politics, Labor, and the Frankfurt School in America
2. Authoritarian Labor
3. Worker Hostility to ‘Jewish’ Habitus
4. The Hatred of ‘Jewish’ Economic Practices
5. Political and Social Dimensions of Worker Antisemitism
6. The Social Bases and Dynamics of Exterminatory Antisemitism
7. Theorizing American Labor Antisemitism
Conclusion

Appendix A: AFL and CIO Unions Represented in the ISR’s Labor and Antisemitism Project
Appendix B: The ISR’s “Survey of Studies Prepared by the Institute” (August 1944)
Appendix C: The ISR’s Methods and Data
Appendix D: Degree of Intensity of Prejudice and Targets of Critique
Appendix E: The ISR’s Contributors to the “Studies in Antisemitism” and Key Labor Study Personnel

Those interested in the Frankfurt School, American labor during World War Two, antisemitism, sociological theory, and the sociology of gender and ethnicity.