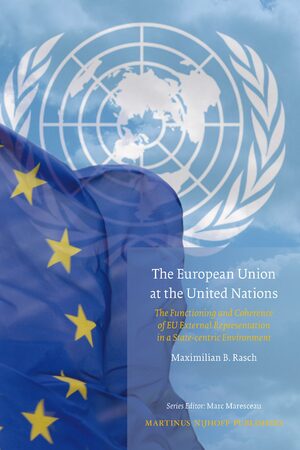 The European Union at the United Nations

Author: Maximilian Rasch
The European Union at the United Nations examines the implementation of the Common Foreign and Security Policy (CFSP) regime at the United Nations (UN) in New York. It assesses the functioning and quality of the coordination and representation of EU Member States’ national interests and EU policy aims in the most important international organization. Besides dealing with the effectiveness and coherence of EU representation at the UN, the book scrutinizes the potential of the EU as a single actor in foreign and security affairs, reviews CFSP developments generally, and explores whether the process ‘Europeanization’ is taking place in EU external relations. The qualitative institutional analysis is supported by a comprehensive quantitative evaluation of EU Member States’ voting behavior in the UN General Assembly.
E-Book

€135.00$168.00
​
Add to Cart
Maximilian B. Rasch obtained his Ph.D. in Government from the University of Essex. He was attached to the European Commission Delegation and the EU Council’s Liaison Office to the United Nations in New York and is presently a Researcher at the Jean Monnet European Centre, University of Essex.
“The analysis moves easily through a subject that is in constant evolution both within and outside the normative and institutional domains, making it difficult to assess the coherency and influence of the EU in the UN. One of the book’s strong points is the thoroughness with which the thesis is argued, supported by a wealth of accurate data and sources, and the realistic approach provided by interviews with officials from the bodies studied.” (The International Spectator, 2009)

"The reader is presented with a comprehensive and inquisitive account of how the EU Member States act in seeking to guard common interests in an often highly confrontational, fast-paced and politically pressurised environment. Focusing on EU representation at the UN certainly provides the author with an apt study object and a sensible delimitation, offering a practical setting in which certain issues and concerns related to the coherence of EU external relations as a whole can be brought to the fore clearly . . . . Rasch’s book is, on the whole, well-balanced, highly informative and distinctly recommendable—not to mention a thoroughly enjoyable read." (European Law Journal, 2009)

“With its detailed and systematic analysis, its rich set of new quantitative data and its many figures and tables, this monograph is an important addition to the existing literature on the EU and the UN… This book will be of interest to practitioners in foreign offices, the EU and the UN as well as to scholars and students dealing with the UN and EU external relations. It points to two directions in the analysis of EU foreign policy that will hopefully be followed by other researchers, as it can help to avoid too easy (and often also too positive) generalisations in the analysis of EU foreign policy.” (Political Studies Review, 2010)
PART ONE: The European Union’s Representation at the UN in New York
1. The EU at the UN - the Coordination Process: Actors and Mechanisms
2. The EU Factor in the Coordination Process
3. Functioning of the CFSP in Specific UN Bodies
4. External Factors Changing the Basis of EU Cooperation

PART TWO: Quantitative Analysis of EU Voting Behaviour in the UN General Assembly
5. Voting Coherence of the EU as a Group
6. Inside Europe: Voting Coherence Within the EU and With Other European Countries

Conclusions
The book will be of interest to scholars and students dealing with EU external relations and international organisations. Practitioners in foreign offices, the EU and the UN will also find the book of value.