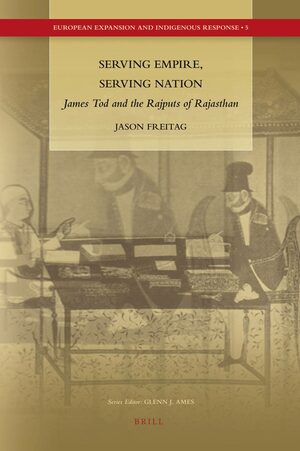 James Tod and the Rajputs of Rajasthan

Author: Jason Freitag
James Tod’s Annals and Antiquities of Rajasthan was crucial in forming the modern image of the Rājpūt, a princely “martial” caste resident in India’s northwest desert. This book explores the relationships between the political power of the British imperial state, the construction of historical memories in the late nineteenth and early twentieth centuries, and the uses of these constructions by European writers and Indian nationalist elites. The case of the Rajputs demonstrates how imperial histories reflected Indian social processes and pre-colonial forms of knowledge, interpreted India for the world outside and for Indians themselves. This book explores the multiple discourses within Tod’s Rajasthan, and European Orientalism, to show how intricately coded the British Empire was and, historically, remains.
E-Book (PDF)

€130.00$161.00
​
Add to Cart
Jason Freitag, Ph.D. (2001) in Middle East and Asian Languages and Cultures from Columbia University is an Assistant Professor of History at Ithaca College. His research interests include the Britsh Empire in India, historiography, and European Orientalism.
"[...] on the whole this is a coherent and well-argued study of the genesis and impact of Tod's Annals and Antiquities of Rajastan as an imperial historiographical construct, not only in Tod's own time but down the decades until India's Independence and after."
- Florence D'Souza (University of Lille, France), The Journal of Bulletin of the School of Oriental and African Studies, Volume 73/3, 2010, pp. 566 - 569

All those interested in Rajasthan and South Asia, the history and historians of the British Empire, Orientalism, imperialism, nationalism, and historiography, including academic professionals, graduate students and general educated readers.