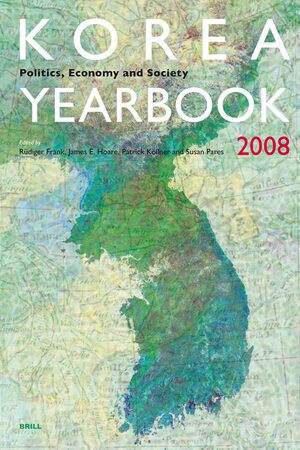 Editors: Rüdiger Frank, Jim Hoare, Patrick Köllner, and Susan Pares
South Korea-related refereed articles in Korea Yearbook 2008 focus on the domestic political scene, relations with Japan, policy towards the North, higher education reform, and new Korean cinema. Additional articles deal with the recovery of the remains of US soldiers killed in the Korean War, economic reform in North Korea, and inter-Korean economic cooperation.
For Korea Yearbook 2009 the editors have announced a graduate student prize of US 750,-. Please see the readership section for more details.
E-Book (PDF)

€72.00$90.00
​
Add to Cart
Rüdiger Frank, Ph.D. (2001) in Economics, University of Duisburg, is Professor of East Asian Economy and Society at the University of Vienna. He has published on North and South Korean political economy. His current research is on North Korea's development and its East Asian context.
James E. Hoare, Ph.D. (1971) in Far Eastern History, University of London, was in the British Diplomatic Service from 1969 to 2003. He is a writer and broadcaster on East Asia as well as a Research Associate at both the School of Oriental and African Studies (SOAS), London and the Department of International Politics, University of Wales, Aberystwyth.
Patrick Köllner, Ph.D. (1998), Humboldt University of Berlin and Habilitation (2005), University of Trier in Political Science is currently Acting Director of the Institute of Asian Studies, GIGA German Institute of Global and Area Studies, Hamburg. From 1996 to 2006 he edited the German-language edition of the Korea Yearbook.
Susan Pares, was in the British Diplomatic Service from 1965 to 1987. She is a writer and editor on East Asian affairs.

"A chronology of events, split into sections on South Korea, North Korea, and inter-Korean relations, opens the volume. This is followed by a core set of chapters: two offer detailed explorations of politics and economy in, first, South Korea, then North Korea; next comes an account of inter-Korean relations, then an account of foreign relations. In these, this reader’s enthusiasm is at times tested, but the reliability of the accounts is not in question, and the Yearbook’s real value, and the reason it will stay on library shelves for many years to come, is precisely these
opening 72 pages, since, put together over a number of years, they build into a detailed historical account."
Keith Howard, Bulletin of the School of Oriental and African Studies 72, 3 (October 2009)
"Possibly 'the scoop' in this particular collection is the paper by C Kenneth Quinones entitled 'The US-DPRK 1994 Agreed Framework and the US Army's Return to North Korea'. How many general Koreanists knew that US military personnel have worked alongside DPRK soldiers in recovering the remains of nearly 500 US soldiers killed in the Korean war?'"
Philip Gowman, Book Reviews, Books on Business & Economy, Books on DPRK, Books on Film, Books on Politics, History Books, Other Books (14 March, 2009)

Preface
Chronology of Events in the Korean Peninsula 2007

More details on the Korea Yearbook can be found at wirtschaft.ostasien.univie.ac.at/index.php?id=34449 .