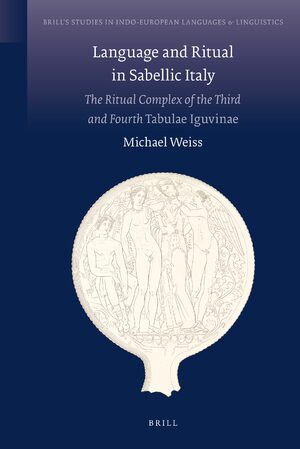 Language and Ritual in Sabellic Italy

The Ritual Complex of the Third and the Fourth Tabulae Iguvinae

Author: Michael Weiss
The Iguvine Tables ( Tabulae Iguvinae) are among the most invaluable documents of Italic linguistics and religion. Seven bronze tablets discovered in 1444 in the Umbrian town of Gubbio (ancient Iguvium), they record the rites and sacral laws of a priestly brotherhood, the Fratres Atiedii, with a degree of detail unparalleled elsewhere in ancient Italy. Taking an interdisciplinary approach that combines philological and linguistic, as well as ritual analysis, Michael Weiss not only addresses the many interpretive cruces that have puzzled scholars for a century and a half, but also constructs a coherent theory of the entire ritual performance described on Tables III and IV. In addition, Weiss sheds light on many questions of Roman ritual practice and places the Iguvine Tables in their broader Italic and Indo-European contexts.
E-Book

This work is of interest to Indo-Europeanists, classical philologists, and students of ancient religion.