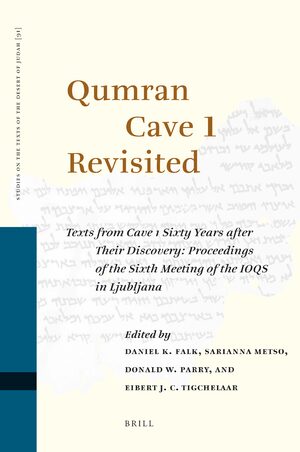 Texts from Cave 1 Sixty Years after Their Discovery: Proceedings of the Sixth Meeting of the IOQS in Ljubljana

Editors: Daniel K. Falk, Sarianna Metso, Donald W. Parry, and Eibert J.C. Tigchelaar
This volume contains a selection of the papers presented at the sixth meeting of the International Organization for Qumran Studies, held in 2007 in Ljubljana, Slovenia, on the topic “Qumran Cave 1 Revisited: Reconsidering the Cave 1 Texts Sixty Years after Their Discovery.” While the opening paper assesses theories about the character of Qumran Cave 1 in relation to the other Qumran caves, all other papers discuss texts from Cave 1, in particular six of the seven large scrolls found there in 1947: the two Isaiah scrolls, the Rule of the Community, the War Scroll, the Thanksgivings Scroll, and the Genesis Apocryphon. Many papers revisit those texts in light of the corresponding versions found in Cave 4.
E-Book (PDF)

€133.00$165.00
​
Add to Cart
Daniel K. Falk, Ph.D. (1996) in Divinity, University of Cambridge, is Professor of Ancient Judaism and Biblical Studies at the University of Oregon, and recently published The Parabiblical Texts. Strategies for Extending the Scriptures Among the Dead Sea Scrolls (2007).

Sarianna Metso, Ph.D. (1996) in Theology, University of Helsinki, is Professor of Hebrew Bible and Dead Sea Scrolls at the University of Toronto, and publishes on the Qumran Community Rule and Leviticus. Her latest book is The Serekh Texts (2007).

Donald W. Parry, Ph.D. (1992) in Middle East Studies-Hebrew, University of Utah, is Professor of Hebrew at Brigham Young University, publishes on the biblical Dead Sea Scrolls, and is co-editor of the Dead Sea Scrolls Reader (Brill, 2004-2005)

Eibert J.C. Tigchelaar, Ph.D. (1994) in Theology, University of Groningen, is Research Professor at the K.U. Leuven, and editor of Dead Sea Discoveries. He publishes largely on the Dead Sea Scrolls.