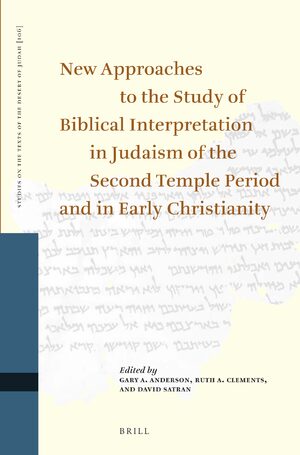 Editors: Gary A. Anderson, Ruth Clements, and David Satran
2007 marked the 60th anniversary of the discovery of the first Dead Sea Scrolls. The 11th International Orion Symposium (January, 2007), “New Approaches to the Study of Biblical Interpretation in the Second Temple Period and in Early Christianity,” provided a measure of the ways in which the discovery of the scrolls has altered the paradigms for textual and historical studies in the intervening six decades. The papers in this volume address such issues as the connections and distinctions between Jewish interpretation within the Land of Israel and outside of it; between Jewish and Christian exegesis in earlier and later periods; between biblical interpretation in literature and in art; between interpretation and the formation of the biblical canon.
E-Book (PDF)

Ruth A. Clements, Th.D (1997), Harvard University Divinity School, is Head of Publications at the Orion Center for the Study of the Dead Sea Scrolls, and co-editor of Text, Thought, and Practice in Qumran and Early Christianity (2009).

I. Interpretation in Context

“For from Zion Shall Come Forth Torah . . .” (Isaiah 2:3): Biblical Paraphrase and the Exegetical Background of Susanna
MICHAEL SEGAL

The Implied Audience of the Letter of James
MAREN NIEHOFF

You Will Have Treasure in Heaven
GARY A. ANDERSON

The Parallel Lives of Early Jewish and Christian Texts and Art: The Case of Isaac the Martyr
RUTH A. CLEMENTS

Didymus the Blind and the Philistores: A Contest over Historia in Early Christian Exegetical Argument
RICHARD LAYTON

Exegeting the Eschaton: Dionysius the Areopagite and the Apocalypse
SERGIO LA PORTA

All those interested in early Judaism and rabbinics, early Christianity and patristics, and the history of biblical interpretation.