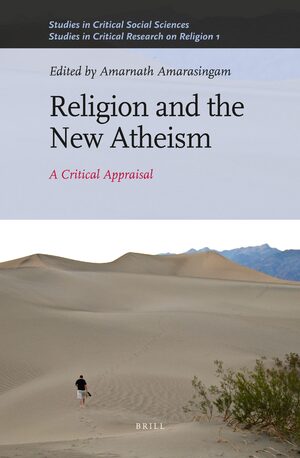 Religion and the New Atheism

Editor: Amarnath Amarasingam
The term “new atheism” has been given to the recent barrage of bestselling books written by Richard Dawkins, Sam Harris, Daniel Dennett, Christopher Hitchens, and others. These books and their authors have had a significant media presence and have only grown in popularity over the years. This book brings together scholars from religious studies, science, sociology of religion, sociology of science, philosophy, and theology to engage the new atheism and place it in the context of broader scholarly discourses. This volume will serve to contextualize and critically examine the claims, arguments and goals of the new atheism so that readers can become more informed of some of the debates with which the new atheists inevitably and, at times unknowingly, engage.

€123.00$152.00
​
Add to Cart
Amarnath Amarasingam is a doctoral candidate in the Laurier-Waterloo PhD in Religious Studies in Ontario, Canada. He has published articles in The Journal of Contemporary Religion, Journal of Muslim Minority Affairs, as well as Mental Health, Religion and Culture.
"This collection is...certainly critical, in the positive sense, and it is also a good read." - James V. Spickard, in: Sociology of Religion: A Quarterly Review, Vol. 73, no. 1 (2012), pp. 94-96
" Religion and the New Atheism [is] a compelling and comprehensive account of the numerous approaches to the criticism of religion that new atheism offers. The books of Dawkins, Harris and Hitchens are not written with academic and intellectual rigour in mind but as a means of presenting the case for radical Enlightenment atheism to a lay audience...required reading for all of those who wish to see scholarly engagement with the implications that new atheism has for a whole range of disciplines that touch on the issue of religion and religious belief." - Jolyon Charles Leslie Agar, in: Journal of Critical Realism, 11.2 (2012): pp. 225-246
"Amarasingam’s volume is indispensable to studying the New Atheism [...]" - Teemu Taira, in: Temenos: Nordic Journal of Comparative Religion, 47(1): 116-122 (2011)
" Religion and the New Atheism sets an example for what will surely be in-depth study in years to come." - David M. Csaszar, in: Journal of Contemporary Religion (cJCR) 27.1 (January 2012)

I. Religion and the New Atheism
Judaism and Atheism: The Challenge of Secular Humanism, Robert Platzner
Beating 'God' to Death: Radical Theology and the New Atheism, Jeffrey Robbins and Christopher Rodkey
Religion as Phantasmagoria: Islam in The End of Faith, Rory Dickson