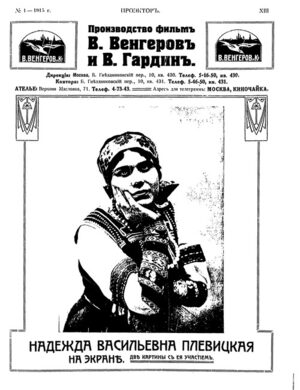 Cinema in late-imperial Russia
In a quantitative sense Russia's cinematographic press comprises a modest segment of the general stream of the Russian periodical press at the beginning of the 20th century. However, in the dynamic of its development, the tempo of its reproduction and distribution, it far outstripped publication of all other contemporary genres and directions, and in this fact alone vividly reflected the general popularity of cinema in Russian society. In view of the fact that the documents connected with the history of the early Russian cinema and the overwhelming majority of materials on film have not survived up to this time, these publications constitute a unique collection of testimonials about the general and particular characteristics of the Russian cinematographic press of the 1900s and 1910s.

The art of the new age
The pages of these cinematographic publications have preserved for history not only the first examples of cinema theory, but also a very wide range of reflections of the artistic consciousness of the art of the new age. They chronicled all the variety and individual details of the cinematographic life of the Russian capitals and provinces, recorded consecutively the growth of cinematography in the cultural life of the country. The publications dedicated to the screen carefully documented the dynamic of the development of film production and distribution, traced the actions of the authorities in controlling screenings and noted all other accompanying factors and circumstances affecting the establishment of the new art.

The collection
Examining these sources, the researcher can reconstruct the film repertoire and assemble almost a complete list of domestic and foreign films shown on screens in Russia; he will find in them a detailed description of pictures, reviews by critics, censored materials, etc. In addition, they contain extremely valuable information about other forms of contemporary entertainment culture - the theater of miniatures, cabaret and music hall.
Microfiche Collection