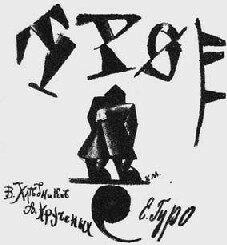 Gold mine
The Russian literary avant-garde was both a cradle for many new literary styles and the birthplace of a new physical appearance for printed materials. The strength of this collection is in its sheer range. It contains many rare and intriguingly obscure books, as well as well-known and critically acclaimed texts, almanacs, periodicals, literary manifests. This makes it a gold mine for art historians and literary scholars alike. Represented in it are more than 30 literary groups without which the history of twentieth-century Russian literature would have been very different. Among the groups included are the Ego-Futurists and Cubo-Futurists, the Imaginists, the Constructivists, the Biocosmists, and the infamous nichevoki - who, in their most radical manifestoes, professed complete abstinence from literary creation.
The collection also includes parodies and the works of imitators. Many books include marginalia of famous artists; different editions of the same book often have a different lay-out, and can even be illustrated by a different artist. For example, the hand written book of A.E. Kruchenykh and V.V. Khlebnikov has two editions. Both are illustrated by a famous artist: The first is illustrated by N.Goncharova, the second by O. Rozanova and K.Malevich. All of these editions are carefully selected and represented in this collection.

Richness and diversity
The collection embraces all major literary and artistic movements. The aims and aspirations of these movements diverge sharply: whereas the futurist manifestos express the aim of seeking forms which would go beyond rational expression; the constructivists state that their prime aim is to connect art with everyday life. However all of them had in common the search for new forms and are committed to experimentation, and the belief that the creative forces of their art could change the world.
The collection gives pride of place to the work of such famous Russian poets as Vladimir Maiakovskii, Velimir Khlebnikov, Igor Severianin, Sergei Esenin, Anatolii Mariengof, Ilia Selvinskii, Vladimir Shershenevich, David and Nikolai Burliuk, Alexei Kruchenykh, and Vasilii Kamenskii. However, it also includes relatively unknown poets whose work has never been republished, for example, Georgii Evangulov, Georgii Zolotukhin, Pavel Kokorin, Boris Pereleshin, and Aleksandr Iaroslavskii. The collection covers the period 1904-1946 and comprises materials published in Russia and abroad; most were published in Moscow, St. Petersburg, Odessa, Irkutsk, Vladivostok, Chita, Khar'kov, Kiev, Tiflis (Tbilisi), Baku, Berlin, Paris, New York and Harbin (China).

Revolution in the world of printing
It is commonly agreed that Russia's literary avant-garde introduced a totally different vocabulary and many new devices, but also introduced a new attitude towards the physical appearance of books and other printed materials. During the first three decades of the 20th century, artists did not regard books simply as vehicles for the conveyance of intellectual content, but also as objects of art in their own right. The eagerness of these artists to experiment with book printing and illustrations is amply demonstrated by the astounding richness of this collection.

Masterpieces of book design
Russian artists did not content themselves with just adding illustrations: They also experimented with the shape and size of books, and used alternative materials - such as cardboard or colored paper - to enhance a book's appearance. Apart from possessing great literary value, the publications of the Russian avant-garde can justifiably be regarded as masterpieces of typography and book design.

Current market value of Russian Avant-garde books
Most books in this collection cost thousands Dollars per book at the auction sales. At Howard Schickler Fine Art, New York Ei i mne and Dlia golosa from Vladimir Mayakovsky with illustrations of Rodchenko are offered for $ 8,500 and $ 5,500 respectively. At Sotheby's Zangezi from Khlebnikov is offered for £ 1,500. IDC Publishers is making available these works for just a fraction of these prices.