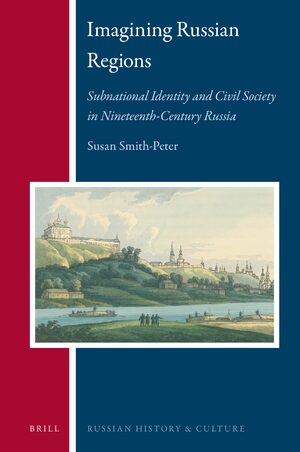 Author: Susan Smith-Peter
In Imagining Russian Regions: Subnational Identity and Civil Society in Nineteenth-Century Russia, Susan Smith-Peter shows how ideas of civil society encouraged the growth of subnational identity in Russia before 1861. Adam Smith and G.W.F. Hegel’s ideas of civil society influenced Russians and the resulting plans to stimulate the growth of civil society also formed subnational identities.
It challenges the view of the provinces as empty space held by Nikolai Gogol, who rejected the new non-noble provincial identity and welcomed a noble-only district identity. By 1861, these non-noble and noble publics would come together to form a multi-estate provincial civil society whose promise was not fulfilled due to the decision of the government to keep the peasant estate institutionally separate.
E-Book (PDF)

€127.00$147.00
​
Add to Cart
Susan Smith-Peter, Ph.D. (2001), University of Illinois at Urbana-Champaign, is Associate Professor of History at the College of Staten Island / City University of New York. She has published widely on topics related to Russian regions and civil society.
"In the eighteenth century, the Romanov dynasty cut its vast empire into new provincial subdivisions. These provinces remained the basic territorial units of the Russian Empire until its collapse in 1917, and they were associated with a variety of ambitions. Russia’s rulers wanted their provincial offices to maintain order, gather information, mobilize resources, and answer commands from the throne. Yet at times the provinces were also imagined as places where local forms of civilian society might emerge, including populations that not only responded to autocratic government but actively worked with it to build Russian power and civilization. In this thoughtful new study, Susan Smith-Peter examines this project and aims to revise our understanding of its nature and evolution [...] By pointing our attention to what she felicitously describes as the “era of small reforms” of the Nicholaevan era—and the ongoing activities of voluntary societies at the provincial level—Smith-Peter helps us recover a broad realm of political and social engagement with the idea of civil society, and with ambitions to center that society in the Russian Empire’s provinces." - John Randolph, University of Illinois at Urbana-Champaign, in: American Historical Review, April 2019, pp. 779-781
"Smith-Peter argues that the autocracy’s fostering of civil society for economic reasons followed by its rejection of political participation by the civil society it had created caused a rift in Russian society that eventually culminated in the revolutions of 1917. An excellent read for any interested in the development of regional identity and politics in Russia or the USSR." - Samantha Lomb, Vyatka State University, in: New Books Network [full text plus interview can be found here: https://newbooksnetwork.com/susan-smith-peter-imagining-russian-regions-subnational-identity-and-civil-society-in-nineteenth-century-russia-brill-2017/]
Acknowledgments
List of Maps
Maps

1 The Imperial Logic of Russian Space

2 The Era of Small Reforms: The Rise of a Non-Noble Provincial Identity under Nicholas I

3 What Should Rural Russia Be?: The Shift from Paternalism to Abolitionism among the Russian Nobility, 1830s–50s

4 Former Serfs and Masters United by Shared Property Rights: Hegel and the Case for a New Rural Civil Society

5 Centralization and its Discontents: The Clash between the State and the Followers of the Hegelian Idea of Civil Society

Bibliography
Index
All interested in the history of the Russian Empire, particularly in the nineteenth century, regional identity and civil society in a comparative European context, and the social history of ideas.