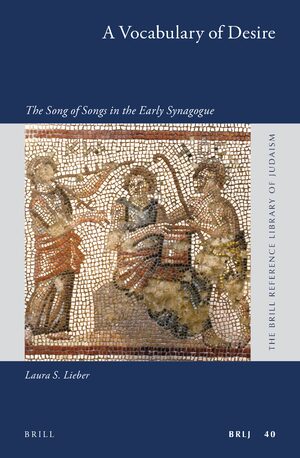 A Vocabulary of Desire

The Song of Songs in the Early Synagogue

AutorIn: Laura S. Lieber
In A Vocabulary of Desire, Laura Lieber offers a nuanced, multifaceted and highly original study of how the Song of Songs was understood and deployed by Jewish liturgical poets in Late Antiquity (ca. 4th-7th centuries CE). Through her examination of poems which embellish and even rewrite the Song of Songs, Lieber brings the creative spirit-liturgical, intellectual, and exegetical-of these poems vividly to the fore. All who are interested in the early interpretation of the Song of Songs, the ancient synagogue, early Jewish and Christian hymnography, and Judaism in Late Antiquity will find this volume both enriching and accessible.

The volume consists of two interrelated halves. In the first section, four introductory essays establish the broad cultural context in which these poems emerged; in the second, each chapter consists of an analytical essay structured around a single, complete poetic cycle, presented in new Hebrew editions with annotated original English translations.

"The Hebrew text edition is accompanied by a lucid and poetic English translation with annotations and a commentary. In this excellent, scholarly text edition, the commentary is focused and to the point...This reviewer highly recommends this monograph to scholars interested in the early synagogue and its liturgy, late antique and medieval Hebrew poetry, rabbinic Judaism, and early Christianity. The book invites further comparative work in these areas." Rivka B. Ulmer, H-Judaic, H-Net Reviews. May, 2015.
E-Book

€ 183,00$ 225,00
​
In den Warenkorb
Laura S. Lieber, Ph.D. (2003, University of Chicago), is Associate Professor of Religious Studies and Director of the Center for Late Ancient Studies at Duke University. She has published widely in the field of Jewish liturgical poetry, including her recent monograph, Yannai on Genesis: An Invitation to Piyyut (2010).
" A Vocabulary of Desire with its beautiful yet scholarly translations educates and entertains. Lieber inspires her readers to return to the universe of biblical love poetry and its heirs…Biblical scholars and scholars of late antiquity and early Judaism will find Lieber's work englightening and accesible." -Riikka Tuori, University of Helsinki, RRJ 19 (2016) 147-172 pp.
Preface
Part 1:Essays
Chapter 1 “A Garden Enclosed”: The Song of Songs as a Gateway to Synagogue Poetry
Chapter 2 “Let Him Kiss Me”: The Place of Piyyut in the History of Interpretation of the Song
Chapter 3 “Your Voice is Sweet”: Piyyut as an Extension of Biblical Rhetoric
Chapter 4 “I Am My Beloved’s and His Desire Is for Me”: The World of the Songs
Part 2: Texts and Commentary
Translator’s Introduction
Chapter 5 A Love Song to the Torah: Anonymous, Qedushta Shir ha-Shirim Commentary
Chapter 6 Lyrics of Love: Yannai, Shivata Shir ha-Shirim Commentary
Chapter 7 Of Ritual and Reciprocity: Yannai, Qedushta Shir ha-Shirim Commentary
Chapter 8 The Power of Dew: Eleazar birabbi Qallir, Shivata for Dew Commentary
Chapter 9 Youthful Love Is Eternal: Eleazar birabbi Qallir, The Groom’s Qedushta Commentary
Chapter 10 Like Stars of Light: Eleazar (birabbi Qallir?), Yotzer Shir ha-Shirim Commentary
A Conclusion


All interested in the history of interpretation of the Song of Songs, as well as anyone concerned with early Jewish and Christian poetry in antiquity; the intersection of Jewish liturgy, culture, and exegesis; and Jewish culture and creativity in the context of Late Antiquity.