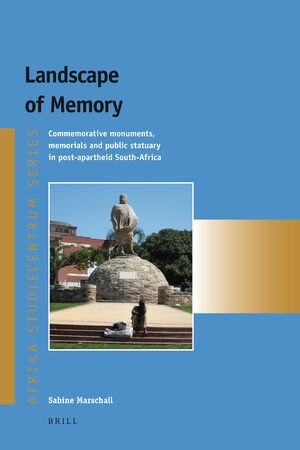 Author: Sabine Marschall
Under the aegis of the post-apartheid government, much emphasis has been placed on the transformation and democratisation of the heritage sector in South Africa since 1994. The emergent new landscape of memory relies heavily on commemorative monuments, memorials and statues aimed at reconciliation, nation-building and the creation of a shared public history. But not everyone identifies with these new symbolic markers and their associated interpretation of the past. Drawing on a number of theoretical perspectives, this book critically investigates the flourishing monument phenomenon in South Africa, the political discourses that fuel it; its impact on identity formation, its potential benefits, and most importantly its ambivalences and contradictions.
E-Book (PDF)

'Marschall, program director of Cultural and Heritage Tourism at the University of KwaZulu-Natal,
critically examines South Africa's official attempts to reshape its commemorative landscape in the
postapartheid era through projects such as the Hector Pieterson Memorial, Constitution Hill, the
Sharpeville Massacre Memorial, Freedom Park, and the National Women's Monument. According to
Marschall, what makes the effort to reconstitute the heritage sector unique "is the systematic,
self-conscious, deliberate, and methodical manner in which new monuments engage with the legacy of
the past." In particular, postapartheid heritage development has focused on the production of memorials
that symbolize the liberation struggle against apartheid, colonialism, and racism in general. Designed to
promote nation building and reconciliation, many of these projects, according to Marschall, have instead
exposed the political fractures in postapartheid society. Nonetheless, South Africa has largely avoided the
tendency to sanitize or romanticize its heritage and has instead made an earnest effort "to come to terms
with previously denied, neglected or shameful aspects of [its] past." Summing Up: Recommended.
Upper-division undergraduates and above'.


'This book is an in-depth, masterful analysis and discussion of the landscape of memorialisation and commemoration in South Africa in the two decades since the end of Apartheid. For her analysis Marschall draws on a variety of sources including interviews and statements by government and heritage officials, marketing material, feedback from the public as well as the analysis of the symbolism and physical form of numerous South African monuments and memorials from both a local and international perspective. While much of this discussion has been presented in article form elsewhere, this book brings all aspects of the project together in a dense, multi-layered volume that addresses the political and socially contentious nature of South Africa’s memory landscape as well as the potential that such memorialisation offers for nation-building and reconciliation'.

2 Paying tribute: The first public memorials to the victims of the
liberation movements 41
Introduction 41
Competition ANC – PAC 43
Mamelodi township 46
Umkhonto memorial 47
Contestation 49
PAC memorial initiative 5
Pointing to the dead 52
Rival stakeholders in the representation of the past 55
Conclusion 57

3 Coming to terms with trauma: The TRC and memorials to the victims of apartheid violence 61
Introduction 61
Apartheid violence and its victims 62
Symbolic gestures of reconciliation 72
The need for truth and reconciliation 75
Material and symbolic reparations 77
The role of memorials in individual and group mourning 80
Acknowledging loss and suffering 82
Dealing with trauma 84
Discomforting memories 90
Conclusion 95

5 Dealing with the commemorative legacy of the past 137
Introduction 137
Destruction, damage and vandalism 138
The removal of Verwoerd statues and busts 140
Relocating monuments 144
Dealing with soviet-era statues in post-communist societies 146
The concept of statue parks in post-apartheid South Africa 152
Re-interpretation 156
Case study: The Terrorism Memorial in Pretoria 158
Recasting personalities 160
Re-positioning the VTM 164
Conclusion 172

7 Freedom Park as national site of identification 209
Early conceptualisation 211
The symbolism of the site 214
Design and consultation 215
Site orientation and Isivivane 220
The Sikhumbuto and the Wall of Names 226
Designing an authentic African monument? 228
Inclusion/exclusion 230
Contestation and counter monuments 233
Who will visit Freedom Park? 237
Conclusion 239

8 Celebrating ‘mothers of the nation’: The Monument to the Women of South Africa in Pretoria 243
Introduction 243
Historical background of the 1956 Women’s March 244
Nasionale Vrouemonument in Bloemfontein 247
Historical background of the Pretoria monument initiative 250
Countering the Vrouemonument 252
Inclusions/exclusions 255
Under-representation of women’s contributions 259
Criteria for heroism 262
Commemorating remarkable women throughout the nation 263
Humility and other visual characteristics of women’s memorials 269
Conclusion 272

10 Commodification, tourism and the need for visual markers 317
Introduction 317
Tourism, heritage and identity 318
Tourism as a lifeline for contested heritage 321
Spirit of eMakhosini: Intangible heritage and the
need for visual markers 322
Nelson Mandela as a tourist attraction:
Freedom Statue in Port Elizabeth 328
Other Mandela statue initiatives 333
Monuments and the symbolic reshaping of the urban environment 339
Statues and name changes: Tshwane 340
Conclusion 345