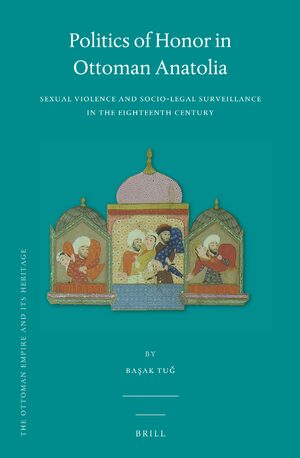 Politics of Honor in Ottoman Anatolia

Sexual Violence and Socio-Legal Surveillance in the Eighteenth Century

Author: Başak Tuğ
In Politics of Honor, Başak Tuğ examines moral and gender order through the glance of legal litigations and petitions in mid-eighteenth century Anatolia. By juxtaposing the Anatolian petitionary registers, subjects’ petitions, and Ankara and Bursa court records, she analyzes the institutional framework of legal scrutiny of sexual order. Through a revisionist interpretation, Tuğ demonstrates that a more bureaucratized system of petitioning, a farther hierarchically organized judicial review mechanism, and a more centrally organized penal system of the mid-eighteenth century reinforced the existing mechanisms of social surveillance by the community and the co-existing “discretionary authority” of the Ottoman state over sexual crimes to overcome imperial anxieties about provincial “disorder”.
E-Book (PDF)

From  110,00 €127,00 $
​
Add to Cart
Başak Tuğ, Ph.D. (2009), New York University, is Assistant Professor at İstanbul Bilgi University. She has published articles on gender, sexuality and politics in the Ottoman Empire during the eighteenth and early nineteenth centuries.
Acknowledgments
List of Maps and Illustrations
Abbreviations

Chapter 2
Petitioning and Intervention: A Question of Power
The Imperial Council and Petitions as a Reflection of Imperial Law in Legal Practice
Petitionary (Ahkam) Registers and Socio-Legal Surveillance
Reporting Sexual Violence
Actors, Strategies, and Rhetoric
Petitions as a Mirror of Local Cleavages

Chapter 4
The Repertoire of Sexual Crimes in the Courts
Why fi‛l-i şeni‛ (Indecent Act), but not zina
Other Expressions Used in the Registers to Describe Sexual Assaults

Chapter 5
The Penal Order of Eighteenth-Century Anatolia
The Enigma of Crime and Punishment in the Court Records
Social and Institutional Limits to the Authority of Local Judges
Under Whose Discretion was Sexual and Moral Order?
In Lieu of Conclusion: Silence and Outcry in the Records