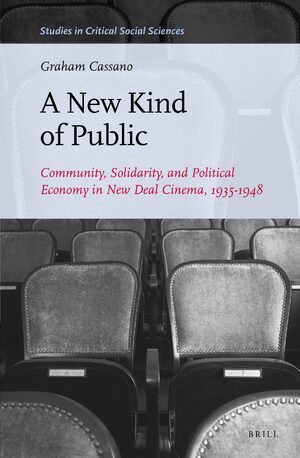 A New Kind of Public

Author: Graham Cassano
In 1936, director John Ford claimed to be making movies for “a new kind of public” that wanted more honest pictures. Graham Cassano’s A New Kind of Public: Community, solidarity, and political economy in New Deal cinema, 1935-1948 argues that this new kind of public was forged in the fires of class struggle and economic calamity. Those struggles appeared in Hollywood productions, as the movies themselves tried to explain the causes and consequence of the Great Depression. Using the tools of critical Marxism and cultural theory, Cassano surveys Hollywood’s political economic explanations and finds a field of symbolic struggle in which radical visions of solidarity and conflict competed with the dominant class ideology for the loyalty of this new audience.
E-Book (PDF)

€111.00$138.00
​
Add to Cart
Graham Cassano is Associate Professor of Sociology at Oakland University, in Rochester, Michigan. He has published articles on a range of topics, including Thorstein Veblen's social theories, the sociology of American labor, and postmodern Marxian theory. He edited the volume, Class Struggle on the Homefront (Palgrave, 2010) and co-edited the volume,with Richard A. Dello Buono, Crisis, Politics, and Critical Sociology (Brill, 2009).
"Rarely is an immensely serious book so much fun as is the case with A New Kind of Public. Recalling, for some of us, some of the most entertaining films of the New Deal era, and introducing them to others, Graham Cassano also offers an ambitious and theoretically sophisticated reading of what those films tell us about popular culture, class, race, gender, and audience. The result is a study ideally suited not only to history and film studies classes but also to those in sociological theory. [...] Indeed I suspect this fine book will find readers in a great many settings.
David Roediger (University of Kansas, USA), Critical Sociology 41:6 (Sept)

"Cassano develops original insights into New Deal cinema -and also into cultural artifacts in general - by applying to them creative interpretations of C. Wright Mills and a self-critical Marxism. As he opens up the complexities of artifact, audience, and their overdetermined and contradictory relationship, a powerful and critical cultural analysis emerges, one with wide implications for understanding social structures and changes."
- Richard D. Wolff (University of Massachusetts, Amherst (retired), author of Democracy at Work: A Cure for Capitalism)

"This sophisticated and powerful work shows how stars, directors, studios, writers, and censors responded to the new possibilities of entertaining an audience formed by the labor upsurges of the mid-1930s. In his constant identification of telling detail, his sweeping ability to see the workings of class without losing sight of the impact of race and gender, and his deft use of theory, Cassano more excitingly approximates the wonderful work of the late Michael Rogin than does any other contemporary writer."
- David Roediger (University of Kansas, and author of Seizing Freedom: Slave Emancipation and Freedom for All)

2. 1936 My Man Godfrey
Cinematic Corporatism
Forgotten Men
Two Communities
Responsibility and Recognition
Mastery and Servitude
“The only butler we ever had who understood women”
Captain of Finance
Mask as Mark

3. 1936 Swing Time
Recognition and “Schemes of Life”
The Power of Fashion
The Political Economy of Desire
Swing Time’s Realism
Immigrants and The Shadows of Blackness
Culture and Barbarism


4. 1937 The Hurricane
Popular Front and Labor Affiliations
Colonial Order and Pacific Passions
“I’m just the same as a white man”
Two Communities
“Look at them Dance. There’s the island’s answer to your law”
De-Colonized Independence and Enslaved Servility
“You’re all guilty”
Contradictions and Paradoxes

6. John Ford, From Radical Critique to the White Garrison State, 1940-1948
Radical Traditionalism in The Grapes of Wrath
Symbolic Domination as Traditional Compensation
The Language of Patriarchy
Allegories of Race
Narrating Trauma as Radical Critique
Capital, Class and the Charmed Circle of the State
Workers’ Control
The Paradoxes of Radical Representation
Two Voices
From Class Conflict (Back) to Corporate Community
“all I can see is the flags”
“We’ll have no more Grapes of Wrath…”

Epilogue: Psycho (1960) and the New Domestic Gaze
The Gaze
Interpellating Community
The Loss of the Collective Spectacle

References
Films Cited
Index
All interested in the history of American cinema, the sociology of the labor movement, and anyone concerned with applied cultural theory and postmodern Marxism.