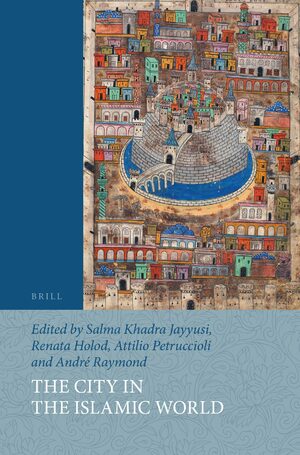 The City in the Islamic World (2 vols.)

Editors: Salma Khadra Jayyusi, Renata Holod, Antillio Petruccioli, and André Raymond
The purpose of this book is to draw attention to the sites of life, politics and culture where current and past generations of the Islamic world have made their mark. Unlike many previous volumes dealing with the city in the Islamic world, this one has been expanded not only to include snapshots of historical fabric, but also to deal with the transformation of this fabric into modern and contemporary urban entities. Salma Khadra Jayyusi was awarded Cultural Personality of the Year by the Sheikh Zayed Book Award for her profound contribution to Arabic literature and culture in 2020. The paperback edition of The City in the Islamic World was published to celebrate the occasion.
E-Book (PDF)

Salma Khadra Jayyusi is a poet, writer, translator and anthologist. Jayyusi’s scholarly career spans the UK, Spain, Italy, Germany, England, Iraq, Algeria, Lebanon, Sudan and the USA, where she has lived and worked. She is the founder and director of East-West Nexus and the Project of Translation from Arabic (PROTA). Jayyusi has edited anthologies of Arabic literature, including Modern Arabic Fiction: An Anthology; Modern Arabic Poetry; and the widely appraised The Legacy of Muslim Spain (Leiden, 1992). Renata Holod is an archeologist and art and architectural historian of the Islamic world. She is the College for Women Class of 1963 Term Professor in the Humanities in the History of Art Department, and Curator of the Near East Section, Museum of Archaeology and Anthropology at the University of Pennsylvania. Holod has taught at Penn since 1972, and was a visiting Clark Professor at Williams College in 2002. She has conducted and/or directed archaeological fieldwork in Iraq, Afghanistan, Syria, Iran, Morocco, Turkey, Ukraine, and Tunisia. As a curator, Holod has created exhibitions in the United States and Turkey. She is the author of numerous publications on contemporary as well as historic buildings, sites and territories.
Attilio Petruccioli is Professor of Landscape Architecture and Dean of the School of Architecture at the Polytechnic University of Bari, Italy. From 1994 to 1998 he was the Aga Khan Professor of Design for Islamic Societies at the Aga Khan Program for Islamic Architecture at the Massachusetts Institute of Technology. From 2012 to 2013 he was the Msheireb Property Chair at Qatar University. Petruccioli has written and edited more than 32 books on the topics of architectural design, methodology of design and the history of Islamic architecture.
André Raymond † was Professor Emeritus at the University of Provence and an expert on the history of the city in the Arab world. He published a number of books and studies about the great Arab cities in the Ottoman period (Cairo, Aleppo and Tunis). Raymond was director of the French Institute for Arab Studies in Damascus, and of the Institute for Research and Study on the Arab and Islamic World in Aix-en-Provence.

"While her acclaimed edited collection on al-Andalus ( The Legacy of Muslim Spain, 2 vols. [Brill, 1992]) remains significant, Salma Jayyusi has surpassed that earlier work with The City in the Islamic World in both scope and ambition. ...this work is a valuable addition and a major contribution to our understanding of the city in Islamic civilization."
Muzaffar Iqbal in Islam & Science 10.2 (2010).

"Without a doubt, this collection of 46 original articles will become the authoritative work on the city in the Islamic world."
R. W. Zens in Choice June 2009.