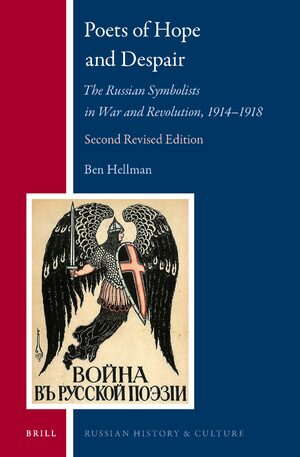 Poets of Hope and Despair

Series:  Russian History and Culture, Volume: 21
Author: Ben Hellman
Now available in Open Access thanks to the support of the University of Helsinki. In Poets of Hope and Despair: The Russian Symbolists in War and Revolution (1914-1918), Ben Hellman examines the artistic responses and the philosophical and political attitudes of eight major Russian poets to the First World War and the revolutions of 1917. The historical cataclysms gave rise to apocalyptic premonitions and a thirst for a total spiritual metamorphosis. A major topic of discussion was the role of Russia in this process. Other issues raised were modern Germany, the future of a divided Poland, the occupation of Belgium, and the dilemma of the Russian Jews. In the wake of the military setbacks, hopes were mixed with feelings of fear and despair, all expressed in fictional as well as in nonfictional form.
E-Book (PDF)

€109.00$131.00
Hardback
Add to Cart
About MyBook
Ben Hellman, Ph.D. (1996), University of Helsinki, is a Senior Lecturer Emeritus in the field of Russian Literature. His numerous publications include Fairy Tales and True Stories: The History of Russian Literature for Children and Young People (1574-2010) (Brill 2013) and Hemma hos Tolstoj: Nordiska möten i liv och dikt (Stockholm 2017).
Contents

1 Symbolism Before the War

All interested in Russian modernism, especially Symbolism, and Russian history of the war years 1914-1918 and the revolutions of 1917.