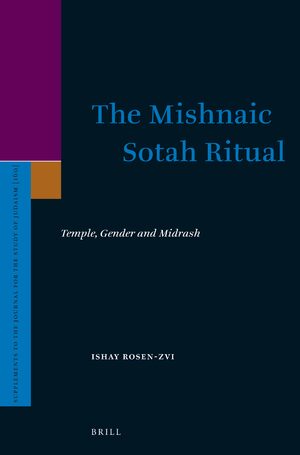 Author: Ishay Rosen-Zvi
This study analyzes the specific textual formation of Mishna Sotah. Diverging significantly from its origins in the book of Numbers, the Mishnaic ritual was traditionally read by scholars as an "ancient Mishna", narrating an actual ritual practiced in the second temple. In contrast to this generally accepted view, this book claims that while Sotah does contain some traditions, its overall composition has a clear ideological and academic form. Furthermore, comparisons
with parallel Tannaitic sources reveal the ideological redaction, which carefully selected only those opinions which support its rewriting of the ritual as a public punitive ritual, while rejecting all reservations and opposition to its specific punitive character – even ignoring the possibility of innocence of the suspected adulteress. The author’s groundbreaking conclusion is that, regardless of the form the real ritual did or did not take at the temple, the specific
Mishnaic ritual was (re)invented by the rabbis in the second century C.E. From its very inception, it was purely textual, reflecting rabbinic imagination rather than memory.

From  147,00 €181,00 $
​
Add to Cart
Ishay Rosen-Zvi is the Head of the Talmud and Late Antiquity section in the department of Hebrew Culture Studies at Tel-Aviv University, where he teaches Talmudic literature and culture. His main interests are: Midrashic hermeneutics; the formation of the Mishna; Temple rituals in rabbinic literature; and gender and sexuality in late antiquity. His Book Demonic Desires: YETZER HARA and the Problem of Evil in Late Antiquity was published by the University of Pennsylvania Press (2011).
Introduction: The Enigma of Tractate Sotah
Part One: Textual Studies
1: Warning and Hiding, Sotah 1:2
2: The Threat, Sotah 1:4
3: Humiliation. Sotah 1:5-6
4: Drinking and Death, Sotah 3:4-5
Part Two: Contextualizations
5: “Measure for Measure” in the Sotah Ritual
6. Historical Reality and Ideology in Mishnah Sotah
7. Theatrical Punishments: Ezekiel and the Mishnah
8. Texts and Rituals: The Riddle of Mishnah Sotah
Afterword: The Temple in the Mishnah